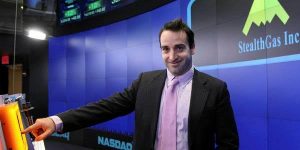 A surprisingly strong second quarter result is set to put StealthGas on the map for new investors at a time when its market capitalization is almost $1bn below the value of its fleet.

Chief executive Harry Vafias believes shares in the Nasdaq-listed company are potentially the cheapest in the sector and today’s forecast-topping results should boost investor interest.

“The value of the company’s ships is $1.1bn and the market cap is $150m,” Vafias told TradeWinds in an interview today.

“If you think about it it’s completely crazy. The people that do understand the maths and the strategy of the company can pick up some really cheap shares right now.”

StealthGas has a long-standing following from around five established institutional investors and counts Michael Dell among its major backers.

However, with the bad LPG market and a period of disappointing results, interest in the stock has fallen during the past few years.

“We are by far the cheapest company out there by any financial metric,” Vafias said.

“For those people who want to invest in LPG and US listed companies, we are probably the cheapest one out there and the one with the least risk because of the valuation and the low leverage.

“From now on, from these second quarter results that caught many people by surprise, I think we are going to get calls from newcomers who believe in gas and believe in green energy and want to get in while the share is so cheap,” Vafias said.

The shipowner was speaking after StealthGas reported earnings per share of $0.09, a full eight cents ahead of forecasts.

“We have been in a nice conjunction where earnings are going up and costs are going down, which created this very nice result,” Vafias said.

StealthGas saw second quarter revenue climb by 10% to $43.4m. It has also been active in the sale and purchase market with the disposal of seven ships for close to $30m in cash this year.

The company has taken delivery of all 26 vessels from a vast newbuilding programme while keeping debt levels below 40%.

“We took them in without any hiccups and problems. That showed the strength of the company’s reputation and the balance sheet.”

Greek Odyssey far from over

A Hackathon with real purpose