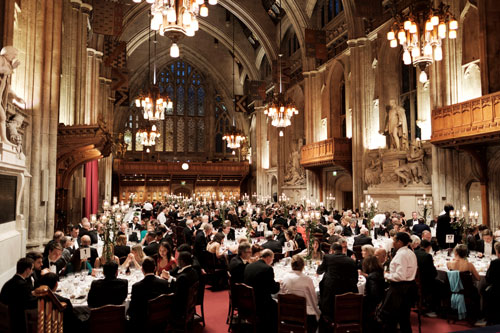 A full view at the Guildhall

Five prize recipients gave lectures at Cass Business School before receiving their awards at a banquet at the Guildhall, in the City of London

The 2018 Onassis Prizes, awarded to the world’s foremost academics in the fields of finance, international trade and shipping, were presented at the Guildhall in the City of London on Monday 24th September 2018. The awards were presented to recipients by guests of honour, Sheriff Neil Redcliffe, representing the Lord Mayor and His Excellency Mr Kitack Lim, Secretary-General, International Maritime Organisation.

The prizes, each worth $200,000, are sponsored by the Alexander S. Onassis Public Benefit Foundation and awarded every three years by the Foundation in close co-operation with Cass Business School, City, University of London, its Costas Grammenos Centre for Shipping, Trade and Finance, and the City of London Corporation.

The Prizes celebrate the life and achievements of Aristotle Onassis, the Greek shipping magnate, in the fields of shipping, finance and international trade where he excelled and reflect the Onassis Foundation’s strong commitment to education. Established in 1975 to honour the memory of his son, Alexander, the Foundation supports initiatives in education, culture and health and is funded by half the profits of the Onassis shipping business.

Each of the Prize recipients delivered a lecture on their field of expertise at Cass Business School. The awards banquet at the Guildhall was attended by academics and senior representatives of the finance, trade and shipping communities of the City of London and other world capitals.

“Shipping, trade, and finance have played a crucial role in establishing London as a global city and an international centre of commerce. It is therefore particularly fitting that these prestigious Onassis Prizes are awarded here, in the world’s leading international financial and shipping centre. I am very pleased to have the opportunity to present the Onassis Prize in Finance given the importance of financial services to the City of London’s past, present and its future.”

“I am delighted to be here tonight to award the Onassis Prizes in International Trade and Shipping. I warmly congratulate the prize recipients for their contributions towards deepening understanding of the issues involved in international trade and the challenges facing the maritime industry. We all understand the importance of preserving an open international trading system and climate change, technological disruption, and seafarer welfare are among the challenges that the shipping industry confronts. I commend the Onassis Foundation and the Centre of Shipping, Trade, and Finance at Cass Business School for supporting these prizes and providing much-needed recognition of the importance of academic research in addressing these issues.”

Recipient of the Onassis Prize in Finance, Professor Douglas W. Diamond, University of Chicago, is one of the world’s leading authorities on financial cycles and liquidity crises and was an important voice in the financial regulation debate following the 2008 financial crisis. In his acceptance speech, Professor Diamond said:

“I am delighted to receive the Onassis prize.  After the recent financial crisis, policy makers and scholars have a renewed focus on the stability of financial institutions.”

The 2018 Onassis Prize for International Trade is shared between Professor Jonathan Eaton and Professor Samuel S. Kortum. Over the past two decades, Professors Eaton and Kortum have collaborated to develop a model of international trade which integrates geographical factors into traditional understanding of comparative advantage.

“The Onassis Prize in International Trade raises awareness of the field’s contribution, which goes back to David Ricardo, to economic prosperity. A real pleasure in my life has been interacting with the brilliant, wonderful people working in international trade. The Prize can help the field continue to attract the best minds out there. Our current situation shows how much work remains to be done.”

Professor Samuel Kortum, the James Burrows Moffatt Professor of Economics at Yale University, began his academic career working on technological innovation and patenting. In recent years, in addition to ongoing projects with Jonathan Eaton, he has worked extensively on carbon pricing in an international setting. During his acceptance speech, he said:

“Receiving the Onassis Prize in International Trade is deeply gratifying as recognition that others value our contribution. Much is still left to be done. The prize is a stimulus to advance on the vexing issues that remain in the field of international trade.”

Professor Brooks is the first woman to win an Onassis Prize. Over a 40-year academic career, Professor Brooks has established herself as a leading authority on liner shipping regulation, port effectiveness, and short sea shipping. She recently led a major research project into the value of shipping to Canada. At the awards dinner she said:

“I am so honoured to have been chosen as one of two recipients of the 2018 Onassis Prize in Shipping. To be the second Canadian, and the first woman, to be awarded this most prestigious prize accorded to academics in the field makes it even more of an honour. I grew up in a small town in Nova Scotia, a province where shipping was critical to its history and economy, but I did not know then how important the industry was to global prosperity. No great journey of discovery is ever completed alone, and my success is shared with all the colleagues and mentors who worked with me over the years.”

Professor Wayne Talley is a world expert on port efficiency, piracy and safety at sea. He has also authored several authoritative textbooks on port and maritime economics. After receiving his prize from Mr Kitack Lim, Secretary-General of the International Maritime Organization, he said:

“I am honoured to receive the Onassis Prize in Shipping in recognition of my contributions to shipping research and my economic theoretical contributions to maritime business research. My intention is to promote the establishment of a Ph.D program in maritime business at Old Dominion University to further the study of shipping and ports as providers of services, where the key variables in understanding port efficiency are quality of service variables such as speed and reliability.”

Dr Anthony Papadimitriou, President of the Onassis Public Benefit Foundation and Chair of the panel of judges, commented:

“Awards like these, allow us to foresee and, in a way, return from the future, where the work of the distinguished scholars of our era will have received the greatest possible recognition. Aristotle Onassis’ name is synonymous with the spheres of endeavour in which our laureates are engaged, and shipping, trade and finance are the three core areas of business activity in contemporary economies. The contributions made to the research in these fields by today’s winners is such that we can safely say they have brought us not one but many steps closer to the knowledge we will enjoy in the future. We, at the Onassis Foundation, are particularly proud to support the Onassis International Prizes for Finance, Shipping and Trade in association with the City of London and the City University/Cass Business School. The awards are already in their fourth iteration. Previous winners have continued to distinguish themselves and make outstanding contributions, with Professor Eugene Fama receiving a Nobel Prize for his work.”

In his remarks at the banquet, Professor Costas Th. Grammenos CBE, Chairman of the Centre for Shipping, Trade and Finance, Cass Business School and an instrumental figure in establishing the prizes, congratulated the five prize recipients for their achievements:

“The Onassis Prizes are awarded for the fourth time and one can safely say that they have become the most highly respected international awardsin the areas of finance, international trade and shipping.  I warmly congratulate the recipients whose distinguished achievements have profoundly influenced their disciplines and continue to have an impact on academic thinking and business conduct worldwide.”

“At Cass we have been at the leading edge of extraordinary business education for 50 years, aspiring to excellence and constantly seeking new ways to serve our students and alumni and shape business practice and policy.  We are proud to work with the Onassis Foundation and our Centre for Shipping, Trade and Finance to recognise the contributions of Professors Diamond, Eaton, Kortum, Brooks and Talley to finance, trade and shipping.”

The prize recipients were originally announced in April 2018 at a ceremony in the Mansion House by Alderman David Graves, representing the Lord Mayor of the City of London, Alderman Charles Bowman.

The Onassis Prizes panel of judges consists of:

In 2009, the Onassis Prize in Finance was awarded for the first time to Professor Eugene Fama, the Robert R. McCormick Distinguished Service Professor of Finance at the University of Chicago Booth School of Business. Professor Fama went on to win the 2013 Nobel Prize for Economics for his work on portfolio theory and the efficient market hypothesis. Since 2012, the Onassis Prizes in Finance, in Shipping and in International Trade are awarded in their present form every three years.

The Onassis Prizes exemplify the Onassis Foundation’s intentions to raise the profile of Greece, on a global level, and to foster science, innovation and research, so that contemporary society may reach its fullest potential. Through the Lindau Nobel Laureate Meetings and the Onassis Lectures, not to mention the thousands of scholarships for the support of Greek studies in universities abroad, the Onassis Foundation strives to support education and create connections and networks around the world, in fulfilment of the vision of its founder, Aristotle Onassis, who excelled in the fields of shipping, trade and finance and was a constant ambassador of Greece worldwide.