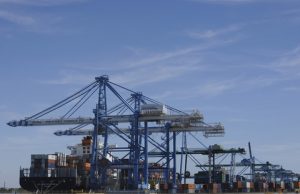 Mineral water and dairy powder specialists Danone and Euroserum have become the latest container shippers to be recognised by the Medlink Ports association for their regular use of the river network between the Rhone-Saone corridor and the French Mediterranean coast.  They join 25 previously cited companies, all but two of which ship by container.

Danone and Euroserum each ship via the Saone port of Macon for export from Fos.  They also utilise rail links, confirming Medlink’s aim to include the promotion and development of rail options within its modal shift strategy.

Foodstuffs giant Danone is the world’s second largest supplier of bottled waters, which represent 19% of its sales.  The company has used Macon for 18 years from three sites supplying its Evian, Volvic and Badoit brands.  In 2017, shipments between these sites and Fos totalled 4,800 teu – mainly by river – for export to destinations including China, Japan and the UAE.

Euroserum is the world market leader in demineralised whey powder, a key ingredient in infant milk formulation.  The river mode was adopted six years ago for output from three of its production sites to China, Indonesia, Malaysia, Africa and the Middle East.  Some 90% of its exports via Fos is forwarded by barge or by rail from Chalon-sur-Saone, with last year’s river volumes accounting for 4,200 teu.

Both companies chose the river solution based on their strong partnership with Macon-based Alaine Overseas, a leading foodstuffs freight forwarder specialising in eco-friendly modes, and are the first shippers to be recognised by Medlink for their container flows on the Saone.  Other companies to have received the accolade include Auchan, Bayer, Carrefour, Michelin and Renault Truck.

The achievement was marked during a meeting of multimodal professionals in Macon hosted by Medlink Ports president Jean-Claude Gayssot and Saone/Loire chamber of commerce director-general Bernard Leyes.

A Practical Overview of the IMO 2020 Sulphur Cap

Central banks need to focus on inflation and...