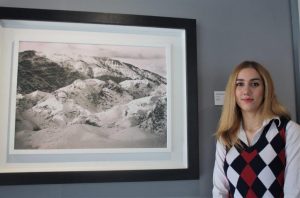 A new London gallery is hosting a celebration of distinguished film directors – unusually, without their movies, but showcasing their talent in fine art photography as reflecting the dynamism they have brought to cinematography.

CAMA Gallery in St James’s, London, is exhibiting photographic prints from eight leading lights of the film industry in Iran, who cast their eyes on widely diverse subject matter. There is the beauty of landscape, the destruction of buildings and place by man-made and natural catastrophe, theatrical features and the life of the common people, amid broader themes. 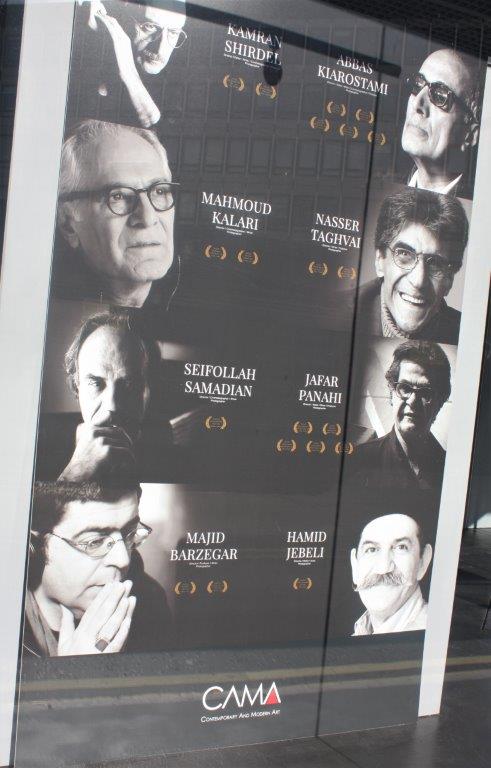 A tribute to Iranian cinema and its international reach, Time Lapse (a reference to still images that play with the passing of time) demonstrates that the talent of these directors reaches beyond iconic filmmaking to the creation of individual frames of fine art.

The exhibition recognises the intersection between film and photography, just as CAMA London, as the only gallery of Iranian art in the UK capital, seeks to reach out across perceived boundaries.

Specialising in modern and contemporary art of Iran, the gallery is encouraging engagement with all men and women of lively intellectual curiosity in London and far beyond. Time Lapse is scheduled to run until the end of October 2018, and gallery director Ava Moradi is organising visual art activities at the venue to attract the wider artistic community in its varied national and specific elements. 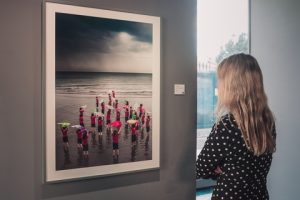 “Sea, in the memory of Alan, the Kurdish child, who never reached the destination.”

The aim is on a politically neutral platform to heighten awareness of the vibrancy of Iranian contemporary art – for instance, this was the first such gallery to organise a panel discussion on the subject.

The film doyens set out to present insights into how society works and its idiosyncrasies. 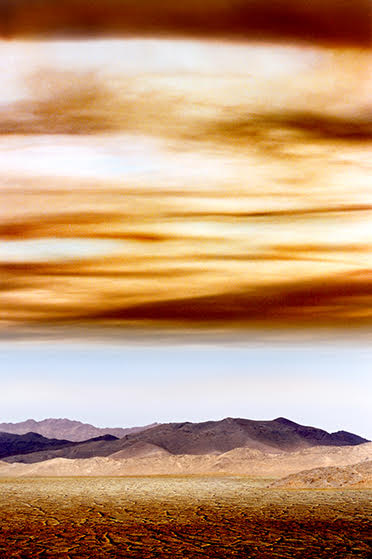 Mona Khosheghbal, Tehran-based chief executive of CAMA, said that once the directors had become celebrities, their experience in other fields had not been explored. Such masters had been in communication with each other and around others in different fields, inspiring them to create distinctive art with exceptional concepts.

The exhibit which may have most immediate resonance to visitors is entitled “Sea, in the memory of Alan, the Kurdish child, who never reached the destination.”

The signed print on photographic paper by Jafar Panahi shows two dozen children holding aloft sheets of paper in memory of the three-year-old Syrian boy of Kurdish background who drowned on September 2, 2015 in the Mediterranean and whose body was washed up on shore.

Alan and his family were fleeing to Europe in a small inflatable boat, which capsized five minutes after leaving Bodrum, Turkey. Sixteen people were in the boat, which was designed for at most eight people. They were trying to reach the Greek island of Kos, a mere 30 minutes from Bodrum. Photographs by a Turkish journalist of Alan’s body gained international coverage and led German chancellor Angela Merkel to open her country’s doors to 1m refugees.

Jafar Panahi’s second photo is a single inverted tree in memory of an enduring figure in Iranian cinema, director Abbas Kiarostami, who died in July 2016 in Paris. The younger man began his career as an assistant to Abbas Kiarostami who was known for experimenting with the boundaries between reality and fiction during his four-decade career. Kiarostami studied painting and graphic arts at Tehran University designed posters, illustrated children’s books, and directed advertisements and film credit sequences before being hired in 1969 by the Institute for the Intellectual Development of Children and Young Adults to establish its film division. Many of his movies examined the lives of Iranian schoolchildren. 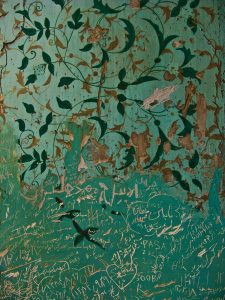 Kiarostami’s later work included a documentary about Ugandan orphans whose parents died of Aids or were killed in civil war. In our photo, gallery director Ava Moradi is seen with an untitled photo by Abbas Kiarostami picturing the drama of a snowy Iranian mountain scene.

Associated with the Iranian new wave movement, Jafar Panahi won the first major award for an Iranian film The White Balloon, at Cannes. Despite recent restrictions in Iran, the director managed secretly to shoot several films, including Closed Curtain which was smuggled to Cannes in a USB drive hidden in a cake.

In his telling style, Mahmoud Kalari illustrates what he says is the art of destruction, including a ruined and graffiti-ridden wall of a palace which is transformed into a luminously patterned vision, and the menace of a dust storm. The series is dated 2007.

Educated at Tehran University, Kalari was employed by Paris-based Sigma Photo News Agency for four years and in 1980 was ranked one of the’15 Best Photographers of the Year by Time Magazine.

Kalari started his film career in 1984, winning the Best Cinematography award at Tehran’s Fajr International Film Festival. He worked with the great directors of Iran and young and emerging talents.

Nasser Taghvai presents two scenes of a dust storm dominating the sky in bright glowing bands. Most of his film work has been based on novels. One of them, Captain Khorshid, is an adaptation of Ernest Hemingway’s To Have and Have Not, which won third prize at the Locarno International Film Festival in 1988. Familiar with the seaport cities in the south of Iran, in his early years he was described as “a Sindbad teenager in a dream world.”

Majid Barzegar is represented at CAMA Gallery by among other images, an avian-crowded Study of Birds. Rainy Pictures, Barzegar’s film production company, was founded in 1998 with the aim of developing and producing imaginative feature films as well as original short films.  With A Minor Leap Down, he won the Fipresci prize in the Panorama section of Berlinale 2015, and others of his production have won international praise.

For his photography, Seifollah Samadian is fascinated by everyday locations, such as a fishing co-operative at lunchtime and [a far-distant] lone white car. He started photography at 15  and won the World Press Photo Award for Daily Life, capturing the impact of war on children’s games. 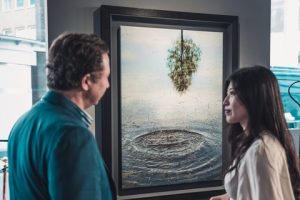 At the Iran news agency, he was in charge of the photography unit, and began publishing as editor-in-chief the Tassvir Magazine. He is the founder and director of Tassvir Film Festival and Tassvir Film Centre, a member of the Tehran’s Art and Experience cinematic group and the co-founder of the photographer’s association of Iran.

His TV and stage acting roles include the voiceover for popular puppet characters, and he is keen that the role of the comedian should be appreciated, saying: “Audiences think if a movie is comic, so it should be superficial and pointless; though the most serious dialogues have been heard from a character like Charlie Chaplin… The Great Dictator, in my opinion, has been the most political movie ever made.”

Hamid Jebeli has been drawing, painting, and sculpting for many years, although only now are such works being seen in public.

The show at CAMA gallery includes photographs by Kamran Shirdel from the early days of the Islamic Revolution, which were kept as film negatives, and have been printed after 40 years.  Kamran Shirdel in Italy with teachers of the calibre of Roberto Rossellini, Michelangelo Antonioni, Gillo Pontecorvo, Francesco Rosi,Vittorio De Seta, Cesare Zavattini and Pier Paolo Pasolini.

He has received many trophies and lifetime achievement awards in Tehran, Belgrade, Dushanbe, Dubai, Portugal, Paris, Rome, Sardinia, London and the US, and been a jury member in international film festivals. In 2010 he was appointed Cavaliere della Repubblica Italiana by the then Italian President

This exhibition is one of a series under the title of Time Lapse. The first was of paintings by the leading poet Ahmadreza Ahmadi.

Time Lapse is at CAMA Gallery, 19 Dacre Street, London SW1, until the end of October 2018.

Fleet Optimization and Innovation Headlines of the Week 2018/10/11

AAL gets to grips with vaculift technology, in Australian first!