The forgotten flag and Remembrance Day 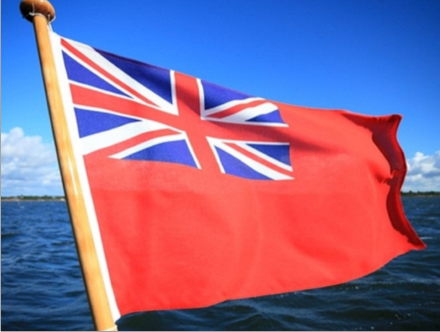 The Cenotaph in Whitehall will be the focal point of remembrance across the UK and for so many around the world on Sunday 11th November, the centenary of the Armistice. Of the six flags displayed on the Cenotaph, the overlooked one is the Red Ensign, that of what was the Mercantile Marine in the First World War, now the Merchant Navy. Its only civil ensign, it has been present on the memorial since its unveiling in 1919.

Two miles to the east, on London’s Tower Hill, the Red Ensign will fly over another Remembrance Day service with worldwide significance. This will be held at the national Merchant Navy Memorial which bears the names of those merchant seafarers killed in the two World Wars and the Falklands Campaign. Civilians all, men and women aged from 74 to 13, they have no grave but the sea. Commemorating all who have fought and fallen in the defence of the United Kingdom and the Commonwealth, the service begins at 1030 on Sunday, 11th November. Attendance is free and all are welcome. It is organised annually by The Honourable Company of Master Mariners (HCMM), a Livery Company with membership open to British and Commonwealth Master Mariners from the Merchant and Royal Navies. Its priorities are professional standards, education and training. Founded in 1926, the Honourable Company’s Patron is HM The Queen and its Admiral, HRH The Prince Philip, Duke of Edinburgh.

THE MERCANTILE MARINE IN THE FIRST WORLD WAR

By 1913, 80% of Britain’s wheat and 50% of its meat came from abroad, as did such as ore for 50% of pig iron production, while motor vehicles and the Royal Navy’s newest ships depended on imported oil. All came by sea, not least the merchant ships of Britain’s Mercantile Marine. That dependency was recognised in February 1915 as any illusion that the War on land would be short disappeared. The Imperial German Navy instead saw cutting the trade routes as the means to victory, expressed by Admiral Scheer, Commander-in-Chief of the High Seas Fleet, as ‘Our aim was to break the power of mighty England vested in her sea trade in spite of the protection which her powerful fleet could afford her’.  As a result,, a campaign of unrestricted submarine – U-boat – warfare led, by April 1917, to one in four merchant ships leaving this country being lost to torpedo, mine or gunfire.

With such as only six week’s wheat supply remaining, HM Government was compelled to introduce the convoy system, groups of merchant ships being escorted by Royal Navy and Allied warships across the Atlantic in particular. Together with the Admiralty’s view that the Royal Navy was not a defensive arm, there had been reluctance to accept convoys because merchant ship crews were thought incapable of the station-keeping and manoeuvring demanded. Another was the feeling that ports could not cope with the simultaneous arrival of several vessels. Some owners of faster vessels were reluctant for financial reasons. Spurred on by the Prime Minister, David Lloyd George, these concerns were overcome, as were legal and insurance complications. With Britain facing capitulation through starvation within six months, convoy operations began in May 1917. It changed the outcome of the First World War.

HM King George V recognised the Mercantile Marine’s service and sacrifice by conferring upon it the title ‘Merchant Navy’ in 1928 and instituting the appointment of ‘Master of the Merchant Navy and Fishing Fleets’. Initially by HRH Edward, The Prince of Wales, it is held now by HM The Queen.

Allied and neutral merchant ship losses during the First World War were nearly 13,000,000 tons. Of that, British losses were 7,759,090 tons, equating to 2,479 ships. Lost with them were at least 15,000 men and women of the Mercantile Marine. Again unsung, more than 200 women served as stewardesses, matrons and typists on passenger and cargo vessels, hospital ships and ferries. In turn, 58 died in attacks on their unescorted ships in the Atlantic, Irish Sea, North Sea, Mediterranean and Pacific.

The Victoria Cross, albeit Britain’s highest military decoration, was awarded to two civilians in the First World War, the Mercantile Marine captains, Fredrick Parslow and Archibald Smith. Another, Charles Fryatt, was executed by German firing squad in Belgium after the capture of his unarmed ferry. Postwar, his body was repatriated and brought by special train from Dover to London in the converted and decorated luggage van previously used for that of Edith Cavell and subsequently the Unknown Warrior. Fryatt then received in effect a State funeral in St Paul’s. In stark contrast however, merchant seamen had their pay stopped when their ship was sunk, causing hardship for their families. Although this practice had ceased in the Royal Navy in 1741, it continued in the Merchant Navy until May 1941.

In addition to The King’s accolade, later in 1928 what is now the First World War section of the Merchant Navy Memorial was unveiled by HM Queen Mary. It names 12,205 Mercantile Marine and Fishing Fleets’ members who have no grave but the sea. Uniquely of any memorial, the men and women are of 103 nationalities with ages ranging from 73 to 13. Sydney Jeffries, cook on the Lowestoft fishing vessel, Vanguard, which was torpedoed in October 1917, is the youngest from the First War commemorated by the CWGC anywhere in the world. With 23,880 honoured on the Second World War section, unveiled by HM The Queen in 1955, and 17 from the Falklands Campaign, the total of 36,000 commemorated is greater than on any other memorial in the CWGC’s care in the UK. For those merchant seafarers born in East Africa, Aden, undivided India, Hong Kong or China who served under the Red Ensign and whose grave is the sea, there are CWGC memorials in Bombay/Mumbai, Chittagong and Hong Kong. These record a further 9,773 who will be remembered too at the service at the Memorial on 11th November.

TRAVEL: the Remembrance Day service begins at 1030 on 11th November

For details, interview or attendance at the service, please contact Commodore Angus Menzies FCMI MNI RN, Clerk & Chief Executive of the Honourable Company of Master Mariners, on (020) 7836 8179 or at Clerk@hcmm.org.uk