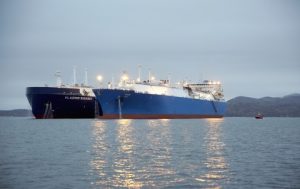 On 24 November 2018, the LNG carrier Pskov successfully completed the first LNG ship-to-ship transfer operation for the Yamal LNG Project. Pskov loaded some 170,000 cubic meters of liquefied gas, which was delivered from the Port of Sabetta (Yamal Peninsula) to the transshipment point by one of the Arctic LNG carriers chartered by Yamal LNG.

The cargo transshipment was carried out at the safe anchorage off the port of Honningsvåg, Norway. Upon completion of the transshipment, Pskov proceeded to her planned port of discharge.

A series of 15 ice-breaking Arc7-ice class LNG carriers was ordered to service the Yamal LNG project, to provide year-round transportation of LNG in the challenging ice conditions of the Kara Sea. These unique vessels have delivered LNG directly to European and APAC ports. In December 2017, the first LNG cargo produced by Yamal LNG at Sabetta was transported by the pilot vessel of the series, Christophe de Margerie, operated by Sovcomflot.

The successful STS transfer to Pskov signals a new phase for the development of the logistics supporting Yamal LNG, the international LNG production and delivery project successfully implemented in Russia. STS transfers enable shorter round voyages for Arc7-ice class Arctic LNG carriers of the Christophe de Margerie series, which increases the efficiency of their operation and consequently of the project in general.

Two conventional LNG carriers operated by SCF group, Pskov and SCF Melampus, are expected to be engaged in STS-operations for Yamal LNG.

A Winter Write Up on the VLCC and...