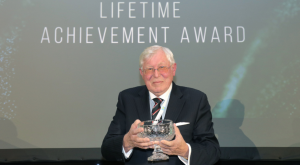 Looking back over his 50 years in the maritime industry, Mr Eek Thorstensen recalled the early days of third party ship management and how he realised that Thome could offer more efficient services to owners trading vessels in the Far East. So began Thome’s growth in that sector which continues to this day.

He also paid tribute to his staff recognising that the success of the Thome Group is not down to just one person and that every employee has contributed with dedication and hard work.

Looking to the future he predicted that, within the next 10 years, there would be fundamental changes in the structure of ship owning with an increase in vessels being owned by asset management companies which bodes well for third party ship managers as their expertise will be required to run these fleets.

In conclusion, he stated that he cherishes all his memories of working in such a dynamic industry and thanked the organisers for recognising him in this way. 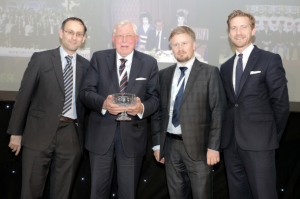 At the same conference Thome’s CEO, Olav Nortun, addressed delegates with a speech about digitalisation and the positive effects it has on improving operational efficiencies for the benefit of ship owners and operators.

He outlined the investment made by Thome in an Operations Hub at the Group’s head office in Singapore which provides up to the minute information on situational awareness by allowing remote tracking of individual ships in the fleet, passage planning, security risk assessment, weather routing, video conferencing, integrated vessel management system implementation, and individual on-board close circuit TV remote monitoring.

He went on to say that, “The hub will allow closer control of Thome’s managed fleet and in times of emergency, the crisis team will be able to react much more quickly and get faster and more accurate information about the situation in real time, allowing them to make informed decisions on how to resolve any issues.”

He finished by stating that Thome stays ahead of the game by constantly innovating and finding new ways to work smarter by embracing all that technology has to offer.