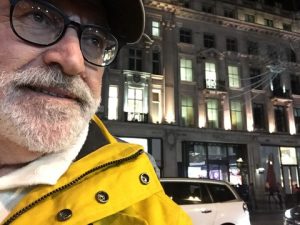 John Faraclas opposite the place his used to work in 1974

John Faraclas takes a tour down his own memory lane; an unforgettable good little adventure…

The dubious work of propaganda and dirty party politics as well as international envy towards the United Kingdom should come to an end forthwith.

Mrs. May has to deliver, this is her task to honour the referendum’s result even if that was just for one vote only; end of the story! The result and the wish of the people in the United Kingdom MUST be respected!

Soft, Hard or even No Brexit and No Deal will not act as a catalyst and write off this country, eh! Wake up and challenge the depressing press, media et al! MPs from all sides of the House MUST rally behind the prime minister! She deserves it! Its for the benefit of all living in these Isles!

It might be that figures of development and trade, particularly those in any high street, look down… but… Consumers market does well given we all live in the 11th year of the messy Planet Ocean’s credit crunch, austerity and all that jazz – mainly we live in a bankrupt World but it is up to us to take the bull by its horns!

I had a walk to unwind today in the Administrative  Capital of International Shipping’s second centre and one of the Planet Ocean’s main consumers’ shopping streets and all was fine despite  the fact of Britain’s economic growth being halved… I don’t like to make comparisons with other countries in the region and indeed within the EU,  but also I don’t like to see the propaganda’s underworlds war influencing the public.

I ended up were I used to work  as a student at Oxford Circus in the junction of two of the world’s main shopping streets – Regent and Oxford Streets, going back during the late Edward Heath’s three-day week; remember, eh! Nothing happened then and nothing will happen now. Have faith and work!

Now do see the other side of the news, the good news when one of the UK’s flag-stores reported record Christmas trading with sales up 12 centum in the five week period before the 31st of December 2018! A discount supermarket chain saw a 33 centum increase in its sales. There is profit too amid the opposite propaganda! See for yourself; make a tour. You’re your own unwinding adventure around!!!! Excellemous! Tourists will continue to arrive as well as students from any corner of the World, and business will continue as usual – remember Arbitration London, English Law to apply… nothing will stop!

And remember, whatever happens, London and its Square Mile will continue to call the shots of international shipping… Have a nice weekend and let 2019 be the start of new era for the United Kingdom and the Commonwealth, a Commonwealth of over 2,2 billion people!

The Bulletin: The 100th Edition