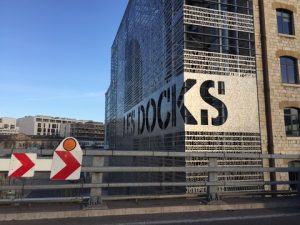 The Marseille Fos port authority and Quechen Silicon Chemical have signed a new agreement marking the next phase of the Chinese company’s €105 million project to build a European plant on a 12-hectare site in the Fos industrial zone.

Quechen is the world’s third biggest producer of silicon used in making ‘green’ vehicle tyres.  Due on stream in 2021, the largest Chinese-owned factory in France will generate 130 direct jobs and annual cargo throughput of 400,000 tonnes.

The latest agreement ratifies the company’s intention to proceed with construction, which CEO Que Weidong confirmed at a signing ceremony in Paris on March 25 attended by China’s president Xi Jinping during his state visit to France.  Others present included French finance and economy minister Bruno Le Maire and Chinese minister of commerce Zhong Shan.

After several years studying potential European sites, Quechen signed an initial letter of intent with the leading French port in January 2018.  A ground lease was sealed last October, enabling site surveys to start.  Since then, the technical design and planning application processes have been under way with assistance from the port authority and ‘economic attractiveness’ agency Provence Promotion.

The factory will be in the heart of a 1,200-hectare area of the Fos industrial zone occupied by member companies of the Plateforme Industrielle et d’Innovation de Caban Tonkin (PIICTO), an association formed with the port authority to synergise activities, development and innovation.

Other parties involved in the Quechen project – described as ‘a further demonstration of the Fos area’s appeal as an industrial base’ – include three regional and local government authorities, Business France and the Marseille Provence chamber of commerce.

A one-day seminar on the Europe-wide Carbon4PUR applied research project on recycling industrial gases has been hosted by the Marseille Fos port authority – one of 14 partners from seven countries involved in the €7 million, four-year experiment.

The port authority is in charge of a study to evaluate the feasibility and potential synergies of recovering CO and CO2 emissions from the Fos plant of ArcelorMittal, the world-leading steel producer, for use by German multinational company Covestro, one of the world’s largest manufacturers of polymer materials for the automotive, electronics, construction and leisure industries.

In the medium term, depending on the outcome, a pipeline could link the ArcelorMittal facility to a new Covestro unit in the Plateforme Industrielle et d’Innovation de Caban Tonkin (PIICTO) area of the Fos industrial zone.

Innovations being studied under Carbon4PUR include the development of a process to treat both CO and CO2 without an expensive prior separation step.  The research at Fos aims to find circular gas recovery solutions that can be replicated in further ecosystems on a European scale.

Other partners in the project include polyurethane manufacturer Recticel of Belgium, Megara Resins of Greece, Germany’s Society for Chemical Engineering & Biotechnology, the French Atomic Energy Commission, sustainable solutions provider the South Pole Group of Switzerland and Netherlands grants and innovation management specialist PNO.  They are joined by five university partners – Ghent in Belgium, Leiden in the Netherlands, Berlin Technical and RWTH Aachen in Germany and the UK’s Imperial College London.