End confusion around the Prudent Uninsured Test, urges claims expert at spring 2019 seminar of the Association of Average Adjusters 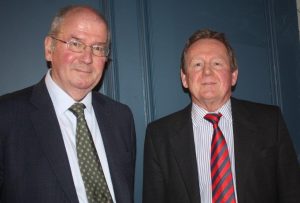 End confusion around the Prudent Uninsured Test, urges claims expert at spring 2019 seminar of the Association of Average Adjusters

Shipowners dealing with repairs and other essentials after a marine casualty are often asked by their insurer to treat such expenses as carefully as if they were a “prudent uninsured.” How prudent is such a demand?

The wisdom of this approach was closely examined at the latest London seminar organised by the Association of Average Adjusters in conjunction with the International Underwriting Association.

The speaker, Nigel Rogers, engagingly entitled his talk “Dear Prudence,” as he posed the question: “How valid is the Prudent Uninsured Test?”  Dear Prudence is a song [dedicated to Prudence, the sister of actress Mia Farrow] on the 1968 White Album of The Beatles.

The claims expert’s conclusion was that “when an owner has a casualty, he may not only hope for but expect assistance and proactive service – something a bit more helpful than the time-honoured diktat” that he acts as if under the constraints of having no insurance.

“In other words, rather less – ‘act as if prudent uninsured’ – and a bit more ‘Dear Prudence – let’s talk,’” urged Mr Rogers, who is a past chairman and a Fellow of the Association of Average Adjusters and partner with Rogers Wilkin Ahern, a City marine claims consultancy and provider of adjusting services.

He began by saying that the call to show prudence in the marine insurance context was nothing like as seductive as in the Beatles ditty and was more in the nature of a reprimand, evoking a mystified response from shipowners, who either declared “But I did” or “But I am insured”.

Mr Rogers questioned how satisfactorily the prescription provides guidance to shipowners in the commercial environment.  When insurers instructed the policyholder to “act as if prudent uninsured” this meant that the owner should make the same decisions as if the costs were borne by owner’s account. “This can lead to confusion, and differences in opinion between insurers and shipowners when commercial issues intrude, and an owner needs to get the ship back trading as soon as possible.”

He conceded that “there is much that is good and sensible in the idea that an owner spends money that he intends to claim from underwriters as carefully as if it was his own and hence selects the cheapest viable repair yard, research the market to source parts appropriately, reserve rights against errant third parties and in general to take all measures to mitigate the cost of repairs.”

There could however be confusion as to what a prudent uninsured would do in certain circumstances, “and also the phrase does not always suffice for many owners in this day and age who require rather clearer guidance and better assistance following a casualty.”

After an insured casualty an owner is entitled to the reasonable cost of repairs and it is sometimes assumed that if the owner is instructed to act as prudent uninsured that would lead towards that reasonable result. But there might be a lack of connectivity between the two mantras – reasonable cost and prudent uninsured – since the owner will be making decisions with an eye to his commercial position. The owner might wind up saying when part of his claim is rejected: “But I did act as if uninsured – I did what I was told.  If I were paying all the repair costs myself then I would without hesitation pay these extra costs to return my vessel to full freight earning operations.  Mine is a time-sensitive trade. I have valued customers.  And in this internet and social media age, I can’t afford the reputational damage that would arise from an avoidable delay.”

This raised the question as to exactly what was insured.  It is frequently described as “hull and machinery, materials, equipment and everything connected therewith nothing excluded.”  But is the ship a physical object or, as the owner might have it, ‘a nice little earner’?

There were stark differences of legal opinion on this point, with some favouring the view that the ship is just a ship, a physical object, and others saying that its capacity as a freight earning instrument should be considered.

While this divergence might seem academic, said Mr Rogers, the issue comes into sharp focus when dealing with the costs of what are termed expediting expenses or temporary measures – for example excess costs of overtime [extra payment to make a ship available for work], temporary repairs, temporary generator hire, and so on.

For an underwriter taking the physical object approach, maintaining that they are responsible for the reasonable cost of repair but not for commercial considerations, the approach in earlier times would have been to pay further costs only where there were savings. There were instances though of underwriters prepared to entertain commercial considerations where an owner was always going to spend what it took to get a vessel back into operation as quickly as possible.

The lines started to become blurred when insurers might see their physical object cover shading into a ‘loss of hire’ area if they became liable to pay expenses to mitigate such an aspect. A solution would need to be found to address the disconnect between the physical and commercial imperatives.

Mr Rogers said that over the years he had dealt with many owners who were excellent at running ships but were challenged in dealing with a major casualty repair. They might lack knowledge of repair facilities in the relevant region; lack commercial clout with the repair yards; have limited experience sourcing spare parts; have difficulties in financing or cash flow; and have no in-house insurance expertise.

For such an owner an instruction to act as if uninsured would probably be extremely unhelpful, particularly when the local office of the attending underwriters’ surveyors was likely to have much greater local knowledge and experience than the owner.

Mr Rogers insisted that it was best both for the owners pleading that they were acting as if prudent uninsured and those who were pointing out that they were insured and needed help, to have early engagement and dialogue with insurers so that issues could be identified and addressed before key decisions were made, so that an owner “knows exactly where he stands.”

Keith Jones of broking group Aon, who is a past chairman of the Association of Average Adjusters, presided at the meeting and warmly thanked Mr Rogers for his presentation