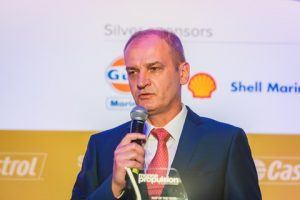 Gagarin Prospect, the world’s first LNG-fuelled Aframax crude oil tanker which is owned and operated by Sovcomflot (SCF Group), has been awarded ‘Ship of the Year’ at the 2019 Marine Propulsion Awards. The award ceremony was held in Amsterdam in May at the Sulphur Cap 2020 Conference.

Delivered in 2018, the tanker is the lead ship in Sovcomflot’s ‘Green Funnel’ series of 114,000-dwt Aframax tankers designed to use cleaner-burning LNG as their primary fuel.

On behalf of Sovcomflot, the award was collected by Igor Tonkovidov, Executive Vice President and CTO/COO. He said:

“The successful adoption of LNG as a primary fuel for our tanker fleet has allows Sovcomflot to strengthen its position as a technology leader of the global tanker industry. We strongly believe that LNG is the optimal fuel solution, both technically and commercially, for large-scale cargo shipping in high-traffic emission control areas, such as the Baltic, the North Sea, the Mediterranean, and along the Northern Sea Route. We are grateful to Shell and other partners for their support in taking this step and their substantial contribution to making maritime transportation more sustainable.”

At present, Sovcomflot has six LNG-fuelled Aframax tankers in operation, with a further two similar vessels under construction together with three LNG-fuelled 51,000-dwt MR product carriers.