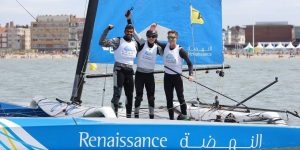 After a disappointing opening to their 2019 Tour Voile campaign, missing out on the eight boat Final for the first of three back-to-back days of stadium racing in Dunkirk, Oman Sail’s Stevie Morrison, Quentin Ponroy and Abdul Al Mashari bounced back to win today’s Final on Renaissance Services.

While British double Olympian and past 49er World Champion Morrison maintains they actually sailed better during some of Friday’s first stadium races, the Renaissance Services team made their second best start in their fifth qualifying race, the resulting second place clinched their slot in the eight boat final. They saved their best start for the Final.

Jumping out to a 15 metre lead straight from the gun Morrison and crew proved uncatchable, leaving the youth team on Golfe Du Morbihan-Breizh Cola to second and Tour top seeds Beijaflore to third.

Although they finished runners-up to Beijaflore on the same day in Dunkirk last year, this is only the Oman Sail team’s second Stadium Final victory. They won in Gruissan in the Mediterranean last year.

“There was no difference in how we sailed today compared to yesterday. In fact we started today sailing horrendously badly. We improved through the day and scraped into the final with a very good last qualifying race. The nature of this is you win the last race, the final and you look like a hero. The nature of the Tour is it all square in the Final, you win it you win the day.“ said Morrison.

“Yesterday we ended up needing trying to play a magic trick to make the final and it did not come off. Today we kept it a bit simple and we definitely got better. Abdul has not sailed for a couple of weeks, we had not sailed for a few weeks and were a bit rusty how we were working together and when things happen out of the blue we struggle, language wise we don’t get the words out. But when we have time and space we are good.”

“It is a cool day but the event does not end for another two weeks. And as much as the results did not switch us off yesterday they don’t lie. We did not deserve to be where we were yesterday, we did not win today by luck we did a good job in the race that mattered, but 80 per cent of today we sailed worse than yesterday.” Morrison, who retired from Olympic sailing in 2013, contends. “It is good for the team.”

“I feel better than yesterday!” smiled Abdul Rahman Al Mashari, “We met yesterday to plan for today and we were on it today. The wind was more stable today and I was more focused in trimming. Now we need to keep this up.”

Moving up the leaderboard to sixth place of the 23 teams on the General Classification, Renaissance Services are eight points behind new overall leaders Beijaflore, and three points off the podium after two Stade Nautique days.

Beijaflore skipper Valentin Bellet commented, “Two teams made a better start than us in the Final and we sailed our race to hold on to third place. So this evening we have a few points of a lead over our rivals. These points will serve us well, and – as we know – may count when it comes to the endgame.”

Racing continues Sunday off Dunkirk’s Malo-les-Bains beaches before the Tour Voile moves to Act 2 in Fécamp.