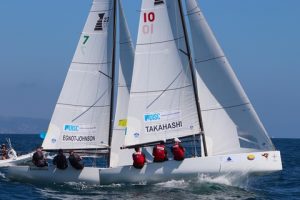 Egnot-Johnson (NZL) survives a late charge by Takahashi (NZL) to win the finals 3-2; by all accounts, the closest racing in the 53-year history of the Governor’s Cup; Parkin tops Dair 2-1 in the Petit Final

“Nick EJ” won an intense final match against now three-time GovCup runner-up, Leonard Takahashi, also a member of the “Squadron.” After taking a 2-0 lead, it is unlikely Egnot-Johnson was feeling too comfortable given the fact that Takahashi had come back from that same deficit in his semi-final match against Frank Dair (USA, California YC) earlier in the day.  Takahashi and crew never lost confidence in their abilities and quickly tied the series 2-2, setting up the final race.

Earlier in the series, observers felt that Takahashi had perhaps a small speed advantage upwind and their downwind boat handling and spinnaker work was often slightly better than the other 11 GovCup teams. In the fourth and most spectacular race of the final series, with Takahashi in the lead, Egnot-Johnson caught a wave in the surfing conditions and established an overlap on Takahashi’s boat. Takahashi and his veteran crew immediately luffed his opponent and kept their spinnaker full for most of the luff, going from slightly behind Egnot-Johnson to clear ahead. A perfect gybe onto starboard tack put Takahashi back in the lead, and win, evening the series up 2-2 and the final, pivotal match was teed up.

At this point, optimal Newport Beach summer conditions were in place with 13-14 knots of wind and a considerable amount of chop to go with the ground swells. As is generally the case in those conditions, going to the right side of the course on the upwind leg was important. At the final start, both boats fought for that right side and Egnot-Johnson got it. With a small lead at the first windward mark, he sailed virtually perfectly downwind and was able to avoid Takahashi’s efforts to place his boat directly upwind of his fellow Kiwi and Club member, and in doing so, disturbed the wind flowing down to the leader’s sails. The next two legs featured Egnot-Johnson doing everything right to protect his lead, and he surfed across the finish line to win the finale.

Egnot-Johnson was greeted by a cheering section onboard the large spectator fleet, but his victory had to wait for a hearing by the on-the-water umpires after Takahashi claimed he was interfered during the pre-start by one of the Race Committee boats setting the leeward gate. The anchors used to secure the marks were dragging downwind in the wind and sea conditions, so a hearing by the International Jury was called as the competitors and spectators eagerly awaited the judgment either to confirm Egnot-Johnson’s victory, or perhaps order a re-sail of the race.

The Jury decision did not take long, and the word was passed via the GovCup Facebook livestream that Takahashi’s request for redress was denied and Egnot-Johnson had won the 53rd Governor’s Cup.

Jack Parkin (USA, Riverside YC) lost in his semi-final against Egnot-Johnson, that also went to the full five races. That put Parkin into the petit final against Dair to determine third place in the regatta. Given the quality of the equally-matched skippers up and down the leaderboard, the 2-0 score in the best of three consolation match was a bit unexpected, but Parkin and his veteran crew were too strong for Dair.

The other competitors who did not qualify for the semi-finals also sailed best of three series to determine their final overall placing.

The Governor’s Cup is presented by DISC Sports and Spine Center headed by BYC member Dr. Rob Bray, with principal sponsors the Croul Family and Terry Causey for the Call of the Sea Foundation.