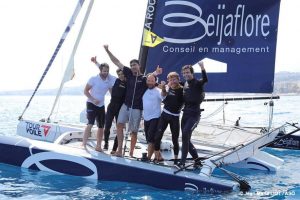 A truly unforgettable Super Final of the Tour Voile served up an even higher than usual dose of tension, excitement and top-level sailing – all set against the stunning backdrop of the Baie des Anges in Nice. A thrilling match within the match saw overall leaders Team Beijaflore and Cheminées Poujoulat embark on an incredible battle to the very last tack with a breathtaking comeback from Beijaflore in the final few metres that clinched the title for the team skippered by Valentin Bellet and Guillaume Pirouelle. After sailing, and winning, an excellent race today, Cheminées Poujoulat, skippered by Robin Follin, had to settle for a thoroughly respectable second place overall, just three points back. For the second year in a row, third place went to Réseau IXIO – Toulon Provence Méditerranée, skippered by Sandro Lacan.

From third place in 2017 to second in 2018 and finally victorious in 2019, Beijaflore’s Valentin Bellet of La Rochelle never lost faith in this hard-won victory: “It wasn’t easy at all, I think we were second to last at a few points. But we stayed positive and kept going after the result that would give us the win. There are some really good teams at the top of this classification. Cheminées Poujoulat was majestic in this Super Final and a great competitor throughout the Tour. It went the way it did but it could easily have gone differently. Something we’ve worked on this year is not giving up even when we’re not in a good position.”

“We have no regrets,” affirmed Robin Follin of Cheminées Poujoulat, “we sailed really well, especially at the end of the Tour because we won the last three days. Right now we’re sad but in a few hours we’ll be happy to have finished second in this great competition. Beijaflore is a superb winner. Overall it’s very positive, we reached all our objectives. We’ll be back to win!”

Rounding off a highly competitive Top 5 were Golfe du Morbihan Breizh Cola, skippered by Solune Robert, and Renaissance Services, skipper by Stevie Morrison, both of whom had racked up wins on more than one occasion. “It was a bit of a crazy wind today which I guess made it fun to watch but not particularly fun to do. We had a good start, we were ahead at the first mark, normally that sets you up for a pretty good race but today on one beat it was paying to go right and on the next to go left, there was no real pattern so there was an element of rolling the dice, and we ended up in fifth today and fifth overall.” explained double Olympian Morrison, skipper of the Renaissance Services team, which is part of the Oman Sail project.

All eyes were on the top two boats – Team Beijaflore and Cheminées Poujoulat – this afternoon off a bustling Promenade des Anglais, as they definitively brought their two-week long duel to an end. Only five points separated the two heading into the final race and both had clear missions in order to claim overall victory. For Cheminées Poujoulat that meant finishing ahead of Beijaflore, with the added requirement of placing at least two boats between them and their rival in order to close the points gap. For Beijaflore the task was to finish, at worst, two places behind Cheminées Poujoulat. With just one shot at the final prize, both needed to handle the pressure well and sail their best possible race.

In a race that seemed designed to keep everyone guessing to the very last second, Cheminées Poujoulat started well and sat at the top of the fleet together with Team Beijaflore and Renaissance Services. But by the end of the first windward leg Team Beijaflore had dropped back to sixth place – leaving four boats between them and their rivals and putting them in a treacherous position which at times appeared impossible to recover from. After getting past the Omani boat Renaissance Services, Cheminées Puojoulat remained towards the top of the fleet for the remainder of the race while Team Beijaflore won and lost ground, continuously moving up and down through the fleet and thwarting any attempt to predict how this race, and this Tour Voile, would end.

Victory finally seemed assured for Cheminées Poujoulat as Team Beijaflore completed the last windward leg in the second half of the fleet. But in an astonishing coup de grâce, Valentin Bellet’s men found some wind on the inside of the course and stormed down the final run to the finish, climbing furiously up the fleet to bag second place and the championship.

Although final victory was decided on the last day, both teams had performed consistently from the off in order to get to that position, qualifying for each and every one of the nine Nautical Stadium Finals. Team Beijaflore demonstrated their class with ten podium finished over the 15 races days, while Cheminées Poujoulat notched up nine, including a run of three consecutive wins over the final two Acts.

In addition to the General Classification, teams have also been competing for separate Youth, Amateur and Mixed rankings. Cheminées Poujoulat could no longer be caught and had the Youth Ranking wrapped up heading into today’s race. The all-female team on La Boulangère, who finished in 12th place overall – narrowly missing out on their objective of a Top 10 finish, were also mathematically assured victory in the Mixed Ranking. In the Amateur Ranking, meanwhile, all was yet to play for, with the two leading teams fighting for the overall win in today’s Super Final. The Swiss team on CER – Ville de Gèneve had established a fairly comfortable lead of 14 points, but their closest rivals, Gregory Lemarchal – Les Sables d’Olonne, were still capable of raining on their parade if they managed to finish far enough ahead. That didn’t materialise, but they did finish in style with a great third place in today’s Super Final to conclude the Tour in ninth place behind CER – Ville de Genève in eighth.