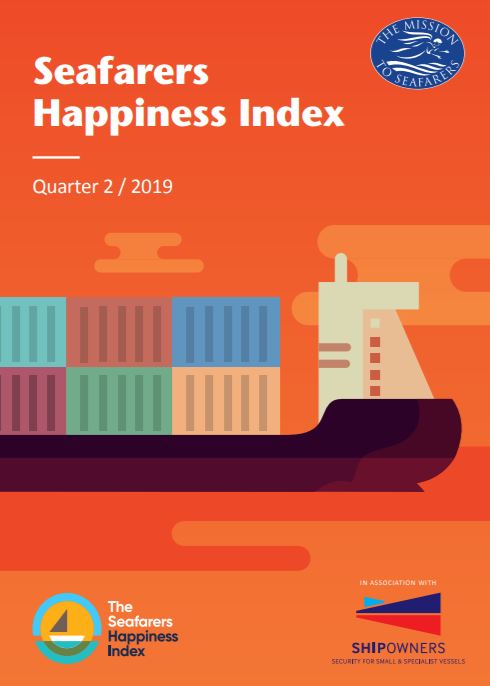 LONDON, 5 August 2019 – The latest Seafarers Happiness Index report, published today by The Mission to Seafarers, has revealed that seafarers working onboard cruise ships and ferries rank among the unhappiest in the industry.

The report, which is produced in association with leading mutual P&I insurer the Shipowners’ Club, is based on the responses of thousands of seafarers across the global maritime industry. The latest report showed that cruise and ferry crews had an average score of 5.3/10 on their general happiness level – 15 per cent less than the global average across all vessel types, which stands at 6.27 this quarter.

Happiness levels for those working on tankers, bulk carriers and container ships were all close to the global average, coming in at around 6.3/10. Seafarers on dredgers were the most satisfied, according to the data. However, the percentage of respondents serving on this vessel type was relatively low.

Across all vessel types, four key issues emerged from the survey responses in this three-month period: delayed payment of wages; decreased shore leave; workload stress caused by smaller crews onboard; and a lack of understanding from shore staff with regard to seafarer welfare issues. At the same time, concern around seafarer abandonment continues to grow, with many seafarers expressing a sense of vulnerability following a number of recent incidents around the globe. The Mission also received a number of troubling reports of aggression, violence and bullying against female seafarers.

On the positive side, seafarers’ happiness levels with their ability to keep in contact with their family when at sea rose this quarter. This is an encouraging indication of the benefits to seafarers from improved connectivity at sea, as well as the importance of further improvements in both the availability and cost of communications to seafarers. In other welcome news, happiness levels among seafarers with their ability to keep fit and healthy onboard also rose. In responding to the survey, a number of seafarers also highlighted the importance of physical exercise as a factor in mental wellbeing.

“As ever, we would like to thank all of the seafarers who have taken the time to share their views with us. Your feedback is essential to us in our aim to create a more transparent industry, where best practice is lauded and shared, and any shortcomings, or indeed harmful incidents, are flagged and addressed accordingly.

“We are already starting to see tangible results across the industry, as evidenced by the growing number of shipping companies expressing an interest in running their own version of the Happiness Index, as well as our recent nomination for the Best Crew Wellbeing Programme at this year’s Safety at Sea Awards.”

“However, we urgently need more data and to hear the stories of more seafarers, including those who have already taken the survey, if we are to build up this good work. To support this, we are building new online capabilities and applications to process the data, and working hard to communicate the results of each survey on a global scale.”

Louise Hall, Director of Loss Prevention at the Shipowners’ Club commented: “As the scale and global reach of the survey continues to grow, we are now able to identify trends in results for particular demographics. In sharing this information, we can help educate operators in implementing initiatives that are most pertinent for their crew.”

The latest survey was completed by thousands of respondents from all regions, with seafarers from the Indian subcontinent, Eastern Europe, Southeast Asia and Western Europe best represented. When measured by age, happiness levels were highest among the youngest seafarers (aged 16-25). This is reinforced when measured by rank, with cadets recording the highest levels of happiness; an encouraging sign among those commencing their careers at sea.