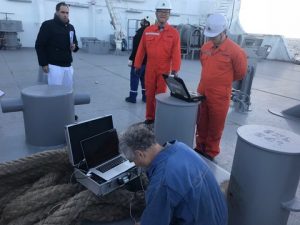 The issue was resolved in conjunction with the vessel’s classification society, engine designer and the shipyard.

The vibrations were identified during a second (gas) sea trial, when vibrations occasionally exceeding the ISO 6954 or ILO/MLC limits, were noted. The vibrations were infrequent and were not necessarily tied to a standard pattern, such as vessel turning or vessel RPM variation. Accordingly, vibration felt in accommodation areas would be smooth and measured below the limits but at times it would increase and remain above the limits. This confused both owner and yard who sought further advice from ABS.

Analysis of independent extended measurements of 5 minutes duration at various locations, such as the vessel’s bridge and captain’s day room, revealed that the vibration demonstrated an occasional, non-periodic frequency beating phenomenon between the two propeller Blade Passing Frequencies. 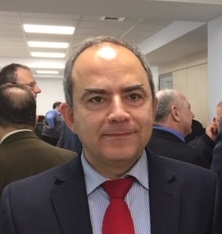 “Mathematically, this occurs when two periodic/harmonic signals synthesize with each other, adding their peaks and their troughs when in phase and nullifying or subtracting each other, when in anti-phase. In this case, this happened with the propeller blade passing frequencies synthesizing their magnitudes as they were approaching a vessel structural natural frequency”, Dr Leontopoulos added.

The identification of the phenomenon was complicated by its non-periodic nature, unlike most other frequency beating phenomena. The Beating occurred when the two propellers were not rotating at exactly the same speed, as commanded, either due to vessel turning or due to propellers interacting with sea currents.

“Although the propellers were commanded to run at the same speed, in practice variations in RPM were seen between the two propellers, such as 70 RPM against 70.5 RPM or 71 RPM, for example. The impact on crew welfare was marked – the shaking made computer monitors in the crew restroom unusable during these episodes”, Dr. Leontopoulos added.

In addition to the impact on crew welfare and efficiency, the phenomenon also risked amplifying structural fatigue pressures in the stern of the vessel or on lifeboat davits and other supports.

Dr. Leontopoulos noted the effect was likely to have been exacerbated by the twin 3-bladed propellers used by the vessel, which had a pulsation effect when the vessel was close to running speed.

Solution
ABS proposed that a newly developed systems software, called synchro-phasing, which uses the same technology principles as in multi-engined propeller aircraft, was introduced to optimize the relative phasing between the two propeller shafts.
This would eliminate the beating phenomenon without the need for electrical balancers’ installation or other similar vibration reduction technologies.

The two-stroke engine designer installed the synchro-phasing software system enhancement, at the request of the shipyard. Subsequently the vessel vibration problem was reported as “eliminated” by the crew and confirmed by a repeat of measurements.
The ship operator subsequently installed the same synchro-phasing software system enhancement to a number of other vessels in its fleet.

“The software controls the speed of the propellers for each individual powertrain. Shipowners and shipyards should give consideration to including it in their future specification”, Dr. Leontopoulos added.