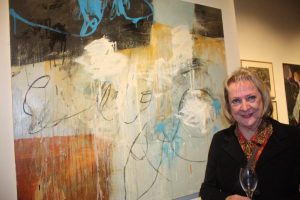 Prize-winners among the best contemporary Welsh artists – whose work includes reminders of a past industrial era and coastal and seaside singularities—have been celebrated in London.

Wales Contemporary/Cymru Gyfoes, a new international competition developed by Milford Haven’s Waterfront Gallery in association with the Welsh Government, put on an outstanding display at one of the capital’s leading venues, the Mall Galleries. Supporters of the project included Milford Haven Port Authority. 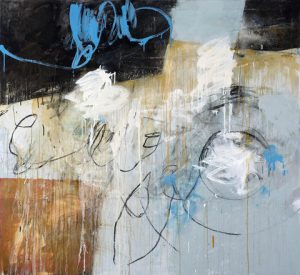 The event proved to be the latest in a run of prize-winning successes for UK artist Day Bowman. She secured the Rob Thompson and Tessa Prior First Prize, which is worth £5,000 and comes with a three-week residency in Milford Haven in February and March 2020, and a one-month solo exhibition at the Waterfront Gallery.

Day was judged to have produced the most notable entry of the initial 500 submissions, from which a short list of 75 was compiled.

Her distinctive style stood out in two entries which were said to confront and question our notion of the coast and seaside, with the question “is it now more border than holiday destination?” These were entitled Plashy Place 5 (the winning canvas) and Tide Pool 9.

Plashy Place 5 is the fifth in her series of compositions in oil, charcoal and conte on canvas, harking back to splashing about at the seaside on the artist’s holidays as a child, at the same time acknowledging her technique in marking the visualisation. 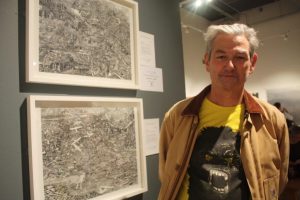 Plashy is a word little used nowadays which refers to a watery or puddled ambience. Day, who grew up in Minehead, Somerset, recalls her hometown beach and holidays in Cornwall and Tenby and elsewhere in Pembrokeshire. She and her brother would draw images in the wet sand as the Bristol Channel tides, which have a huge range, ebbed far out.

She recalls during her stay in Pembrokeshire becoming aware of the connections between the country and Lord Horatio Nelson (1758-1805). During a brief hiatus in the Napoleonic wars in 1802 the naval commander, accompanied by Lady Emma Hamilton and her husband Sir William Hamilton, spent time in Wales.  At Milford Haven, Nelson admired what he described as one of the finest natural harbours in the world. The party dined at the New Inn on Hamilton Terrace which was shortly afterwards renamed the Lord Nelson Hotel.

Day Bowman came first in the Anima Mundi International Painting Prize at the Venice Biennale 2019 and was first in the Bath Arts Open 2019. She then exhibited at Atelier Melusine at Poitou-Charente in western France, from September 5 to October 20. 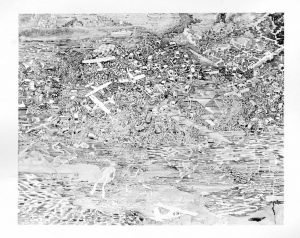 Her other recent appearances have included Drawing on Dorset at the Slade Gallery, Gillingham; the Sunday Times Watercolour Competition; the Old Lock Up Gallery, Derbyshire; the Westmorland Landscape Competition; and the 167th annual open competition of the Royal West of England Academy.

The Valero Petroleum (Valero operates a large refinery on the southern shore of the Milford Haven Waterway) second prize, of £2,500, at Wales Contemporary was awarded to Gerry Davies, senior lecturer in drawing at Lancaster University. Gerry exhibited scenes from Flood Story, showing what he said were “speculative futures of environments submerged because of rising sea levels. They propose that in the future someone will scuba dive over your house. The divers are seen exploring a chaotic world of 21st century detritus slowly settling into layers of new archaeology.” For the works he used Dammar varnish and powdered graphite on Mylar polyester film.

The Valero Petroleum Prize for artists born, educated or resident in Wales, worth £2,000, and the Waterfront Gallery Public Choice Award, worth £1,000, were awarded to Christopher Wallbank. Christopher’s work in graphite and gouache forms part of the Loomery Scrolls project, an art and ecology collaboration with Professor Tim Birkhead. The project allowed Christopher to develop the central element of his practice, namely observational drawing used as a means of reengaging with familiar environments.

The Pembroke Power Station Young Artist Prize of £1,000 was awarded to cross-disciplinary artist Moss Carroll for a monoprint collage depicting the Calon Ddaear mountains, glowing with bold, lush colours in the foreground and fading into icy blues and greys in the background.

The sixth and final prize was a commendation sponsored by Conygar Investments and went to mixed media artist Pete Monaghan. He is fascinated by vernacular architecture: barns and farmsteads which he sees as having a humble dignity. Here, in Blue Tin (West), he depicts one such farmstead, tatty and filled with details that evidence labour: “each patch made in the corrugated-iron roofs is the ghost of someone’s ladder reach.” 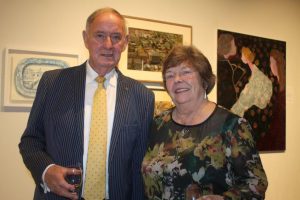 Wales Contemporary is showing at the Mall Galleries in the Mall, London SW1, until November 10 2019. The Waterfront Gallery is at The Old Sail Loft, Discovery Quay, The Docks, Milford Haven. 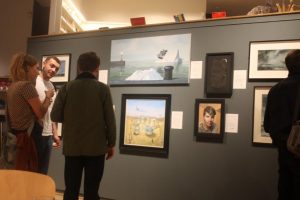