New South America service for the Port of Hamburg 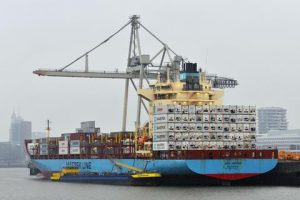 In January 2012, Germany’s biggest seaport was included in the itinerary for the “Andean” service run by the Maersk shipping company.

Established in 2006, the “Andean” service to date has been operating with eight ves-sels with an average slot capacity of 2, 500 TEU. Now that Hamburg and Santa Marta have become part of the scheduled liner service, larger vessels will be deployed starting in 2012. The first arrival in the new port rotation took place on 21 January 2012 with the docking of the JENS MAERSK, a vessel with a slot capacity of 2, 835 TEU (20-foot standard containers). Built at the Volkswerft Stralsund shipyard in 2001, the JENS MAERSK is 216.8 metres long, 32.2 metres wide and boasts more than 400 connections for refrigerated containers (reefers). Additional units with slot capacities up to 3, 267 TEU and 800 reefer connections will follow in coming weeks.

The complete rotation of the service takes 56 days and includes the following ports: Hamburg, Antwerp, Cartagena, Manzanillo (Panama), Balboa, Guayaquil, Callao, San Antonio, Callao, Balboa, Santa Marta, Rotterdam, Tilbury, Hamburg. The “An-dean” is one of the fastest containers services on the Hamburg to Cartagena route, with the Maersk ships taking only 15 days to cover the distance.

“We’re delighted with the new South America service operated by Maersk, which further highlights the growing importance of container traffic on this route. Seaborne container transhipments between Hamburg and South America had already per-formed strongly last year and recorded double-digit growth. Based on our preliminary estimates, we’re likely to have reached a volume of 550, 000 TEU on our South America routes in 2011, ” predicts Claudia Roller, CEO of Port of Hamburg Marketing. “The main cargoes on this route are machinery, paper/cardboard, vehicles and feed-stock for chemical products on the export side, with coffee, meat, fruit and wine ac-counting for the lion’s share of imports, ” adds Claudia Roller.