Ribs tickle the fancy of investment banks and big companies. By James Brewer

A new offshore rigid inflatable boat (rib) charter company, Solent Rib Safaris, has been launched to offer private and corporate charters, and thrill and adventure rides around the Solent.

The UK has seen substantial interest in the rib concept since development of the type over the last half century, with the robust craft used as work boats for shore facilities and merchant ships, and as lifeboats and military craft.

The new venture is deploying the custom-made Solent Voyager, a 10 m Baltic unit that seats up to 12 passengers, as one of the largest offshore ribs on the Solent. Its capability has already attracted interest from investment banks and businesses for charters for corporate events, the company said. 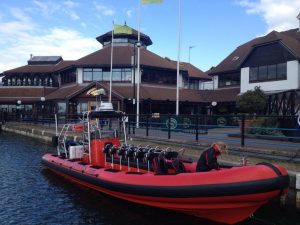 Based in Cowes and Portsmouth, Solent Rib Safaris was founded by chief executive Adam Vere Nicoll, who has captained large luxury motor yachts and in recent years navigated more than 200, 000 miles of the Mediterranean, Caribbean, US and Bahamas. He returned to the UK in order to align his passion for boats with his detailed knowledge of the Solent area.

Mr Vere Nicoll said: “The Solent Voyager is a really unique case of professional craftsmanship, built for the ultimate passenger experience and designed to the highest standards of comfort and safety.”

He added: “2012 is set to be an incredibly exciting year with a huge line-up of events scheduled including Cowes Week, the Super Yacht Cup, Round the Island Race and a number of Olympic events. We will operate from Cowes and Portsmouth, both of which are the main hubs of the yachting world, but we are flexible to our clients’ needs and our crew is fully equipped to be at the forefront of all offshore racing events in any part of the Solent.”

In addition to corporate hire, the craft can be booked per seat for 30 or 60 minute “thrill and adventure excursions, ” and by media organisations for filming offshore events.  In its launch statement, the company stressed its determination to abide by Maritime and Coastguard Agency terms, saying that it was certified to MCA Cat 3R commercial small passenger craft regulations. Solent Rib Safaris is insured by Knighthood Corporate, holds public liability insurance, and operates a marine operators’ combined liability policy.

Dear Sir ,what is the price this boat with same engine and same equipement without rescue boat?Best regards