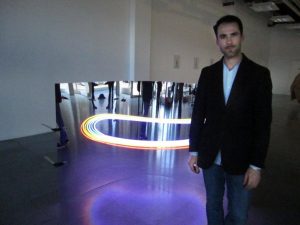 Steven Morgana and his work It was all Ephemeral as a Rainbow - picture by Lee Lin, courtesy of La Scatola Gallery

A cartoon-strip dinosaur dreamed up by a leading energy company, which tried snuff out the character after it drew ridicule, just won’t lie down and die. Terry “the friendly Fracosaurus” is far from extinct online, thanks to angry anti-fracking groups, and he is being referenced again at a new show at a gallery in the City of London. Fracking, the blasting of land to release natural gas, is one of the most contentious issues on the energy scene.

Terry briefly served as hero of a colouring book for children produced by Calgary-based Talisman Energy. Portrayed in hard hat and work boots, he was meant to show the  benefits of the controversial system of extraction. Talisman Terry’s Energy Adventure was distributed in Pennsylvania and New York where the company was drilling, but withdrawn as an educational tool and from the company website – although bloggers kept it posted – after being lampooned in a TV comedy show. 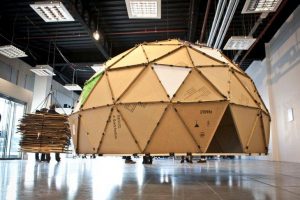 How Much Does Your Building Weigh - picture by Raymond Chueng, courtesy of La Scatola Gallery

Australian-French artist Steven Morgana  has entitled one of the works in his first London solo show Talisman, concerned that corporate intervention was using child-friendly images to gloss over the environmental and economic contradictions of exploration. In contrast to the claim that remedial work can restore a rainbow-blessed, pastoral landscape, he cites the more common symbolism of the rainbow as used in radical causes of equality, societal cohesion, co-operation and progress. His response takes the form of a collage of cartoon imagery and of protest over oil extraction by Peruvians in the Amazon Basin.

In this show, which runs until June 15 2012, the artist explores aspects of entropy, defined as the presumed natural tendency of the universe to crumble into ecological disorder and socio-ecological dissipation.  Only a gallery with the physical space – and the ambition and imagination of its brilliant curator, Valentina Fois – could carry off large-scale spectacles like this, which have to be, literally, engineered into place.

An extension reel had to be laid from a generator at the doorstep of the gallery (at 1 Snowden Street, EC2, adjacent to some of the City’s mightiest financial tower blocks) for the continuation of the rainbow theme. The generator is deployed to power Steven’s installation entitled It Was All Ephemeral as a Rainbow, in which neon lights ringed in front of a concave mirror reflect the image of a rainbow. The presence of the machine – running from non-renewable fossil-fuel – is a reminder that even works of art are consumers. It is unusual for an installation to display its power source in such a visible way, and in doing so Steven is showing that as an artist, he is also using up raw resources. 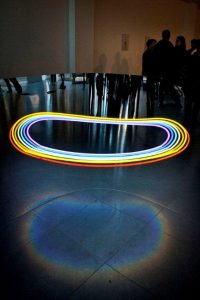 It was all Ephemeral as a Rainbow, by Steven Morgana, picture by Raymond Chueng, courtesy of La Scatola Gallery

The amount of waste created by production is further demonstrated in another work, How Much Does Your Building Weigh?  Here, a substantial geodesic dome made from cardboard shapes is suspended from the ceiling – and balanced exactly by the weight of cardboard discarded in the process of making the shapes.

Finally, a series called Alchemy and Chemistry highlights that water bought by the bottle can be more expensive than the same quantity of petrol.  The chemistry is the product, and the alchemy is the market price.

In work in progress not yet on show, Steven, who is based in London and completing his MFA Degree at Goldsmiths College after gaining his BFA from Curtin University in Perth, Western Australia, is keeping alive the dinosaur disparity.  He is compiling a video that will combine images referring to the prehistoric past, including the dinosaur sculptures created by Sinclair Oil for the exhibit Sinclair Dinoland at the 1964-1965 New York World’s Fair, continuing via defunct architectural structures including the former Crystal Palace destroyed by fire in 1936, to selected YouTube clips.