The Navigator 2012 conference: Steady as she goes

Navigator Shipping Consultants organised with remarkable success the 11th annual maritime conference “NAVIGATOR 2012” on Wednesday, 7th November 2012 at the Athenaeum InterContinental Hotel, Athens. NAVIGATOR Maritime Conference is the first comparable conference under private initiative in Greece and has proceeded to great acclaim since 2001.

The conference attracts more than 500 prominent personalities and experts from the Greek and international shipping community who have honoured NAVIGATOR with their trust and support for more than 20 years.

NAVIGATOR Conference seeks to review, examine and discuss critical issues faced by today’s maritime community, through the insight of experienced speakers, including successful shipowners, foreign ambassadors, distinguished industry representatives and shipping specialists. It is widely covered by the Greek shipping press and generously sponsored by prestigious maritime companies involved in various sectors, as well as by members of the NAVIGATOR  international umbrella.

The minister of the Hellenic Ministry of Shipping and the Aegean, Mr Kostis Mousouroulis, made the opening address, citing the difficult circumstances the shipping industry continues to face, the need to act efficiently against piracy, and the importance of the human factor as a crucial element for development.

The first panel session was dedicated to the threat of piracy and to current market trends, and was moderated by Nigel Lowry from Lloyd’s List.

Captain Pottengal Mukundan, director of the International Maritime Bureau / International Chamber of Commerce commercial crime services, was visiting Athens for the first time, especially to attend the Navigator conference. An expert in the field of anti-piracy, he described the significant increase in the number of attacks during the last two years, and the expansion of piracy-threatened areas in Gulf of Aden, Red Sea and Somalia. Captain Mukundan referred to the varying types of attacks, to particular aspect of their cost, both on materials and human beings. He emphasised the need for more action to ensure crew members are able to pursue their career at sea without fear of being taken hostage and kept under inhuman conditions, or even killed.

He then presented his thoughts on the current situation and measures taken against pirates, including recent initiatives by the Indian navy to assault pirate ‘mother ships’.

Piracy was also the subject of the presentation by Panos Moraitis, chief executive of Aspida Maritime Security. He referred to the system for vetting of private maritime security companies, and what shipowners need to look out for in order to select the proper anti-piracy partner, especially given the over-supply of private anti-piracy services.

Nicholas Kosmatos, president of Sea Link Navigation, further focused on the shipowner’s interest in terms of facing the piracy threat, while George Tsavliris examined whether there is a “light at the end of the piracy tunnel”. He voiced disappointment that more was not being done to protect seafarers, saying that there were political reasons for this. 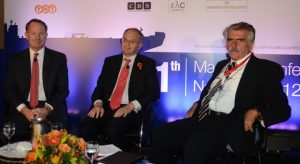 The US Ambassador Daniel B. Smith, The British Ambassador Dr. David. Landsman and Manoli A. Vordonis

Their Excellencies the Ambassadors of the United States Mr Daniel B. Smith and of the United Kingdom Dr David Landsman, honoured the Ambassadors’ Session of the NAVIGATOR Conference with their presence and remarks. The discussion was moderated by Manoli A.Vordonis, a senior member of the Hellenic shipping community.

The value-driven speech of unity, delivered by President Obama, just a few hours after his re-election, became the centre of the discussion.

The importance of the presence in person of the senior state representatives of governments and peoples that are directly receiving the essential goods and commodities delivered by our shipping family, and their participation in a dialogue about issues of concern, was highlighted.

Coffee break at the Exhibition Hall

As he is nearing the completion of his term in Greece, the British ambassador was given the podium first to refer to the size and dynamism of the Greek shipping community in London. He briefly scanned through the broad range of institutions, technologies, expert systems and individuals, capable of coping with the handling of the complex issues of the industry, whether in periods of prosperity or of austerity. He acknowledged the strong presence and ties of the London-based and cosmopolitan Greek shipping community, both as an active player but also as a major partner of the City of London (and wider British) maritime services infrastructure, and expressed confidence that the bonds and cooperation would continue and grow in the future.

Thereafter, the American ambassador highlighted the close and constructive cooperation that has existed for decades between the United States and Greece in addressing the most pressing issues in international shipping.  He drew particular attention to US  cooperation with Greece in meeting current challenges, including maintaining uninterrupted global shipping and supply chains, ensuring international cooperation in the fights against piracy and proliferation of weapons, including nuclear weapons, and helping the shipping industry to become a partner in global environmental protection.

While market recoveries in all sectors still seemed to be far away, to work actively towards growth of trade and transport demand, looked like the obvious necessity. As the situations are not threatening only the shipping community and private enterprises, but are equally stretching publicly floated companies of our globalised world, the issue of holistically catering for industry and wealth sustainability wass by itself raised to a higher level of public concern. The fact that not only the shipping industry, but also cargo producers, commodity buyers, states, banks, yards etc, were at similar impasses, was supporting the notion of urgency and the importance of synergic action and unity.

Dr  Progoulaki referred to the four fundamental elements of maritime policy and especially to maritime labour and the effects expected through the implementation of the new Maritime Labour Convention on the shipping world’s everyday life. According to Dr Progoulaki, the new Maritime Labour Convention aims not only to achieve safe and modern working conditions for seafarers, but also to create fair competition among the shipowners.

John Couyou and Michalis Sigalas, representing two of the biggest ship registries, referred to the changes expected to shipping offices through the Maritime Labour Convention, and the need to adapt our traditional mentality and strategy to today’s environment and requirements.

Capt Tsouris pointed out the difficulties of seafarers and that unfortunately legislators seemed to be unaware of the real working conditions prevailing on board. The seafarer of today needed to have experience in the new technologies as well as managing capabilities in order to face every-day challenges.

Ms Pavlou referred to the new conditions that the labour convention will create on the vessel and in the office, that will reflect  high demands on the profile of the shipping manager, his qualifications and skills.

Her Excellency the Ambassador of Australia, Jenny Bloomfield, addressed the role of today’s Australian shipping industry, and emphasised her country’s willingness to cooperate closely with the Greek shipping community.

The Market Trends and Technical Issues panel session followed, moderated by Prof John Tzoannos, who posed questions facing the shipping industry related to regulatory interventions for the protection of the environment; developments in navigation aids; transparency in operational costs, and the potential of the Athens Stock Exchange as a source of capital for Greek shipping; to a significant speakers’ panel of the following :

Ioanna Bezantakou greeting the wife of the US Ambassador Mrs. Diane Smith at the YCG reception

A view from the reception at the YCG balcony

NAVIGATOR 2012 was held under the auspices of:

In the field of agency, Navigator has established a worldwide network that can serve vessel needs in every port.

(all pictures by Paterakis)