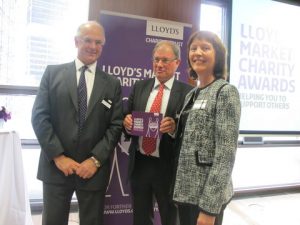 Iain Webb Wilson, head of Lloyd’s charity awards, with John Metcalfe of RFIB and Daryl Ann Hardman of the Friends of the Belarusian Children’s Hospice

The money was formally handed over at a ceremony on December 10 on the 11th floor of the iconic Lloyd’s building.

The charities were of very different profiles, some local, some nationwide, others supporting projects abroad.  One in the last-named category was Friends of the Belarusian Children’s Hospice (UK).  Daryl Ann Hardman, trustee and chairwoman of the Friends, recalled that the Minsk hospice was set up in 1994 in response to an increase in child chronic and terminal disease rates following the Chernobyl nuclear plant accident.  She said that the hospice was the leading children’s palliative project in former Soviet countries, actively training and advising other countries in that wider region on setting up their own children’s palliative care programmes.

The Belarusian hospice cares each year for more than 200 terminally and chronically ill children plus their parents, siblings and, often, grandparents who are involved in the home care of a child.

Daryl Ann expressed the charity’s gratitude for the £2, 000 award, which, she said, would be used to buy much needed medical equipment to help children who can no longer breathe unassisted. Using such equipment means they can continue to be cared for in their own homes. 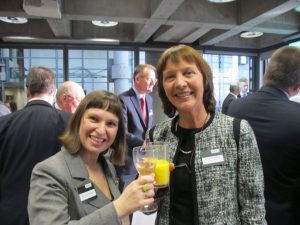 Among those present at the award ceremony were John Metcalfe of RFIB Group , who proposed the hospice charity for an award, and Vassilina Bindley of Lockton, chairwoman of the Russian Insurance Club which has supported the charity for eight years.

Lloyd’s said that in 2012, more than 70 applications were received, more than ever before, for grants in recognition of the fundraising and voluntary work supported by people in the market

Mr Webb Wilson said: “The annual Lloyd’s Market Charity Awards reception is one of the highlights of the year for the trustees of Lloyd’s Charities Trust. At a time when austerity is biting and charitable donations are down by a fifth, these awards highlight the extraordinary levels of generosity and kindness that colleagues in the Lloyd’s market deliver to those in our community.”