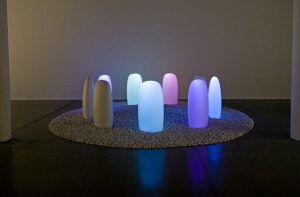 A tricky marine engineering feat has been required to support an ambitious project by New York- based Japanese artist Mariko Mori , who has just opened a solo exhibition at the Royal Academy of Arts, London.

Tranquil video footage of the first of what are intended to be six site-specific installations across the six habitable continents is a feature of Rebirth, an exhibition timed to coincide with the winter solstice of 2012. According to the Mayan calendar, the solstice at December 21 2012 will either mark the end of the world or more likely, the birth of a new era; hence Mariko Mori’s exhibition title.

Her current major venture known as Primal Rhythm consists of two huge sculptures, Sun Pillar and Moon Stone. Sun Pillar has already been installed on a rock in Seven Light Bay, Miyako Island, in Japan’s Okinawa prefecture.  The 4 m high installation is designed as a column of light.  The Moon Stone will float in the water, its colour changing with the tides.  On the day of the winter solstice, the pillar will cast its shadow on the stone, symbolising the marriage of the sun and moon during nature’s rebirth.

Many experts were called in for the project. Among them, to help protect the coral and other natural phenomena in the bay, Professor Eizo Nakaza of Ryukyus University provided technical advice; Okinawa Giken Consulting contributed precision and design skills; and Sahira Kensetsu construction technique. The mayor of Miyako Island led a list of supporters in Japan and internationally for Ms Mori’s Faou Foundation, set up to manage the project.

To transport the Sun Pillar, materials and tools, a boat was built of strengthened steel and fishing floats, with 5, 000 kg cargo capacity. Care had to be taken to avoid coral when positioning scaffolding bases, and to avoid spilling muddy water into the ocean.  Holes were dug to prevent the jackhammer used from creating cracks in the rock.

As the boat towed the Sun Pillar to the ramp leading to the rock, rough waters made it shaky, so it had to be anchored to the ocean floor by its attached metal feet.

A simulated installation went smoothly, and the pillar was loaded on to the boat by crane and then hauled on to the site by pulley. Wires were attached to prevent the sculpture colliding with the ramp, and it was pulled up slowly by a wire connected to the upper section. Curing concrete was used to rotate the sculpture slightly until it reached the correct position.

Ms Mori says that the repercussions of the earthquake and tsunami that devastated much of the coastline of Japan’s largest island, Honshu, have stalled completion of the work, but says that the disaster has confirmed the notion of Primal Rhythm; that we underestimated the power of nature and need to respect it.

Starting and ending with the death and birth of a star, the cycle of life and rebirth is a theme of the Royal Academy show, a series of installations and environments that invite relaxed contemplation.

While in her career she has delved into cyber-culture (earlier thought-provoking exercises influenced by her experience as a fashion student and model included standing in a Tokyo subway car dressed in silver metallic costume as if she had just landed from space, and other happenings examining the implications of biotechnology) she has lately developed a fascination with ancient cultures, among them Japan’s prehistoric Jomon period which lasted hundreds of years, and Celtic traditions in Europe. This leads her to ponder increasingly our responsibility to nature, and the meaning of the cycles of nature.

The London show which continues until February 17, 2013, includes the work Tom Na H-iu, a  glowing  5 m glass piece connected to the Institute for Cosmic Ray Research at Tokyo University, an observatory that detects neutrinos emitted by the sun and the earth’s atmosphere, and explosions that mark the death of stars. Transcircle is described as a modern day Stonehenge and symbolises, through colour changes, the movement of planets.

Royal Academy exhibitions director Kathleen Soriano said that the current show would be the first of a consistent programme for the Academy’s galleries in Burlington Gardens, acquired in 2001, highlighting international contemporary artists. The programme will continue to 2018, by which time a physical link with the main Academy building will be completed.