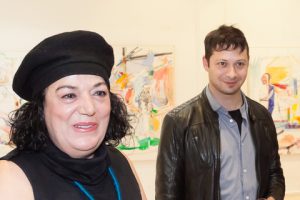 The artist with Eleni Nikodimou who opened the exhibition

Christos Avraam’s reflections on the role of art in today’s society  guide him in his output neither to some kind of reconstruction of reality , nor to the perception of reality as a work of art.  His aim is more ambitious: the artist wants to deconstruct the seeming distinction between the reality and the work of art, showing that between the world and the art there is no gap to bridge.

In the case of Avraam, the limits between reality and art are undermined, since some fragments of the literary world penetrate into the work of art. This is achieved through the techniques of collage and assemblage that Avraam often uses (items such as cartons, wood chips, a t-shirt, the remains of a mop – all bring into life a third dimension). Furthermore, Avraam follows another radical path to bridge art and reality: he tries to preserve his own presence in the canvas, even after the end of the artistic process.  In looking at a work of Avraam you feel that the artist is always present, that he continuously converses with it, and that he lurks over your shoulder to say something more, to add another element, to introduce another thought. 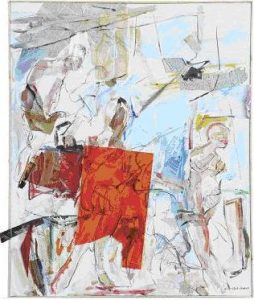 The new exhibition of Christos Avraam entitled “Social Contract” was inaugurated at the Alpha Gallery in Nicosia, Cyprus on 29 January and will run until 16 February 2013. Click here to download the full catalogue of the exhibition.

Works of Christos Avraam are on show too at Saatchi Gallery in London and Plyos Museum in the city of Plyos – which has been described as the “pearl of the Volga” – in the Ivanovo region of Russia.