On the road, off the walls and into the gallery: artist José Parlá explores the psycho-geography of cities 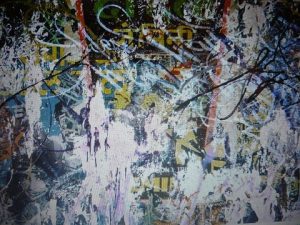 On the road, off the walls and into the gallery: artist José Parlá explores the psycho-geography of cities, By James Brewer

Whenever he is on the road – be it in the UK, India, Cuba or elsewhere – contemporary artist José Parlá collects and photographs cast-offs of the urban landscape. Torn wall-posters, crumbling pieces of plaster and discarded rags are worked into his paintings and sculptures, often overlain with his own wild calligraphy.

He is not the only person to bring street art into the gallery, but he must be one of the very few to bring a bit of the street with him, too. Currently he has imported the outdoors into New Bond Street’s spacious venue Haunch of Venison. Curator Anna Mustonen has organised a striking selection of exhibits into a stand-out show entitled José Parlá: Broken Language. One 5 m composition he began on his arrival in London from his New York studio on January 28 and completed it just in time for the exhibition opening on February 8.

José Parlá is a prolific worker, but he can take his time.  One of his densely-detailed collages based on time in Cuba he had been working on for four years, since 2008.  It embraces political and collective memory, absorbed in his travels in the Caribbean island that were very personal to him. He was born of Cuban parents and grew up in Puerto Rico, then Miami. Hugely talented at an early age, he won a scholarship at 15 to study art, embarking simultaneously on outdoor art at night. 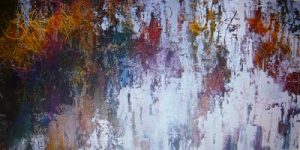 His output, notes Anna Mustonen, parallels the rhythm of the broken language of hip-hop music and the result can be “a slight feeling of dislocation.” Influenced by abstract expressionism, he piles on the layers of found items and meaning, just as cities accumulate a babble of history as one architectural and political era displaces another. A man like Parlá was thus richly rewarded as he rattled along the rough roads of Rajasthan, to Udaipur and Jaipur. The chaos bursts through especially in his canvas Rajsthan Night Drive, combining acrylic, gesso, oil, plaster and ink.

To him, this is the practice of what is known as psychogeography, defined in 1955 by the French ‘situationist’ Guy Debord as “the study of the precise laws and specific effects of the geographical environment, consciously organised or not, on the emotions and behaviour of individuals.”

The works are personal journals, but an acknowledgement that the decay and distress of the built urban surface, while exuding a fascinating dynamic, can be a sign of the distress of the people who have to live daily with inadequate facilities, inequality and injustice.

Commenting on this latest collection, the artist says: “For most of my life I have experienced being in transition and migration. This feeling allows me to bring the broken languages of the global community and its conditions into the gallery.  My work is an empire of fragmented cacophonies, observed performances, palimpsestic musical gestures, and topographical compositions governing the essence of the cities I have travelled through.”