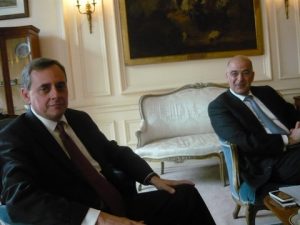 Dendias’ successful  three-day visit in the United Kingdom 2-5 June will be remembered and debated for a long time; John Faraclas writes:

The very eloquent Minister held talks with Home Office Minister Theresa May and the under-secretary for Migration Mark Harper, as well as with Keith Vaz the head of the Commons  Home Affairs Select Committee.

The main issues discussed where that of terrorism, trafficking, illegal immigration and the revised Dublin III Regulation for which on a straight forward basis the Greek Minister and Greece will not sign, and rightly so! This revised regulation places an enormous burden on the country that is the point of first entry for all illegal immigrants entering the European Union. Moreover the assistance of the United Kingdom in crime issues, training and finance was also discussed.

The Minister visited Metropolitan Police’s Counter –Terrorism Coordination Centre and was briefed on its functions . Dendias also visited the Serious organised crime Agency (SOCA) as well as the centre  of re-forwarding back immigrants at Colnbrook.

Worth mentioning the interview on many issues vis-à-vis his post and the situ in Greece to CNBC’s Stephen Sedwick on Squawk Box**, and the one to London Greek radio.

The last event was a press conference at the Greek Ambassador’s Residence in Mayfair where amongst other questions the writer asked him to end this saga with the illegal immigrants coming from the east – mainly Turkey, the Frontex Contribution and participation to be enhanced and zero tolerance to be the name of the game. The shipping community is very sensitive in these issues and we are sure that Dendias in collaboration with Miltiades Varvitsiotis, the newly appointed Shipping Minister of Greece, will hopefully be successful!

*Dendias following his graduation from the University of Athens, Faculty of Law attended courses on Maritime Law and Insurance Law at UCL and Criminology at the LSE!

**The writer too appeared in the same program live from the Port of Piraeus back in May 2012 just prior to Posidonia 2012.