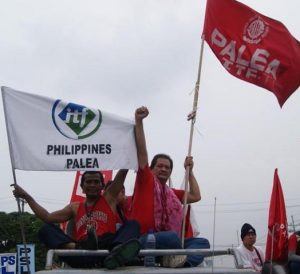 Protest by the Philippine union PALEA

PALEA, who’ve been involved in a dispute with their employers Philippine Air Lines (PAL) since 2010, reported that Solidum was arrested as part of an entrapment operation by the National Bureau of Investigation. PALEA believes Solidum has extorted PHP 2.5 million from its members. In return for the money, Solidum said he would drop charges against members for disrupting airport services in September 2011.

PALEA president Gerry Rivera said: “The arrest of Solidum is but a small step in our quest for justice. We hope that it will pave the way for the dismissal of the harassment case against PALEA.” Rivera also hailed Justice Secretary Leila de Lima for authorising the operation.

PALEA and the new management of Philippine Airlines (PAL) are still in negotiations over the union’s demand for the return of retrenched workers to their regular jobs.

After the announcement of the European Union ban on PAL flights being lifted in mid-July, the European Transport Workers’ Federation (ETF) sent a letter urging PAL to ‘come to a full and fair settlement.’

Delegates to the June 2013 Asia Pacific conference of the ITF restated their solidarity with PALEA.

The full PALEA press statement can be read here: http://partidongmanggagawa2001.blogspot.co.uk

Unions fight for better railways as fares set to rise