Even when we’re laughing, we’re being serious 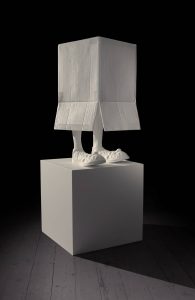 Even when we’re laughing, we’re being serious – new works by London artist Misha Milovanovich are by turn romantic and anti-romantic,  By James Brewer

Psychedelia! Multiple media! Contemporary artist and designer Misha Milovanovich makes bold statements in her painting, prints, photography,  sculptures, apparel and furniture. Two of her works are on striking show for her new London exhibition,  entitled Even when we’re laughing, we’re being serious.

The two works offer different responses to what she calls “our visually overloaded consumer environment.”

Serbian-born Misha, who has been in the UK for 26 years and graduated from Central Saint Martins School of Art,  says that she “takes the energy of our superficial yet perplexing contemporary culture and either detonates the overload or embodies it as withdrawal and isolation.”

First, there is Large Canvas, an acrylic 130cm square explosion of almost volcanic force, seeming to scatter dozens of coloured fragments that seethe against a background of one of her trademark pink hues. It fizzes with luscious immediacy, a pair of blue eyeballs daring us to stare back, and all the more compelling for that. It is meant to “overwhelm the viewer with joyous, sensual abandon, ” Misha says.

Unusually for Misha, it is colour that is abandoned or drained in the second work, a 146 cm high sculpture,  resin

cast, aluminum hydroxide,  with wood. This is a representation of a cardboard box obscuring a truncated form, stopping short of a pair of clown feet. Here is Misha’s description of the piece: “The contradiction between the absurdly comic shoes and the decidedly prosaic, anti-romanticism of the box that seeks to bury them, is powerful and mysterious. Spontaneity is being repressed, denied, shut down. An empty carrier of disposable culture tragically overwhelms a symbol of slapstick abandon and simple joy.”

It might be taken as a commentary on the increasing deadweight of privation stifling previously carefree sections of society. Misha says that she is referring to “homeless feet trapped and wandering within their own personal cardboard city. It is disturbing, melancholy and satirical.” 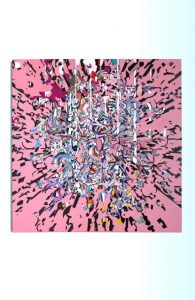 Inspired by a host of influences including surrealism, the cinema and the sea (childhood memories of the poetry of the waves of the Adriatic), the multi-talented artist promotes her work through her Misha World brand. Among her creations are glorious silk scarves – “fantasy fashion” – sold at a handful of selected outlets including the Damien Hirst-backed West End store Other Criteria, and Harvey Nichols.

The exhibition Even when we’re laughing, we’re being serious continues until October 27 2013 at the Hartnoll & Daughter Gallery, 37 Duke Street, St James’s,  London SW1.