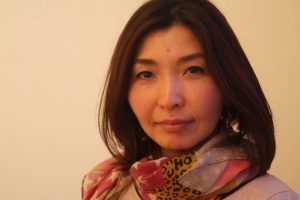 Buoyed by London success, artist Yukako Shibata revisits Japan for a solo show of works that draw out the inner beauty of soft light,  By James Brewer

Yukako Shibata, an artist who for 20 years has lived in London and enjoyed much exhibition success, is embarking on her first solo show in her native Japan.

In the fittingly titled Ethereal, Gallery MoMo Projects in Tokyo will from April 26 until May 24 2014 exhibit 25 of her works that throw a gentle light, and lighting, on the way we can see much more than the obvious in quite ordinary things.

Yukako has an understated style, through which the apparent simplicity of her works masks deeper meanings and impressions, which unfold as the viewer stands in front of them. A hybrid of sculpture, painting and installation, her output reflects the subtlety for which several schools of Japanese aesthetics are renowned.

The concept is neatly summarised in a press release from Gallery MoMo Projects. Yukako “gives a minimal impression not only by using simple and geometric forms in different versions, but also by using sensitive colours, soft light and the sense of rhythm that repetitive forms have.

“Simple figures with various elements have a new visual possibility. More importantly, the soft light and colours that evoke James Turrell speak to the viewers gently through beauty and comfort.”

The American artist James Turrell says that his medium is pure light and considers the sky as his studio, material and canvas, declaring: “My work is more about your seeing than it is about my seeing, although it is a product of my seeing.” Yukako says that she is also influenced by Robert Irwin, pioneer in the 1960s of the Los Angeles-based Light and Space movement. 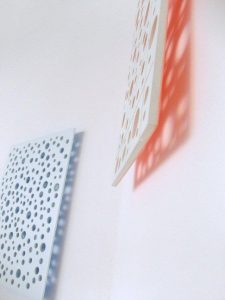 Yukako was born in Otaru, a hilly harbour city which prospered on Ishikari Bay as “the sea entrance” to the northern Japanese island of Hokkaido. Arriving in London in the 1990s, she flourished at London Art School and Byam School of Art, going on to graduate with an MA from the Royal College of Art in 2005.

She has had six solo exhibitions in London, and taken part in 18 group shows in the capital and one in Canada. Her works are in the collections of Doris Lockhart Saatchi, Calyon Investment Bank (now part of Crédit Agricole Corporate & Investment Bank) and other private individuals.

Yukako says in her artist’s statement that through her work, she explores “the fleeting colours of the natural world.” She questions “the complex interplay of light, atmosphere and the human perceptual system. Finding beauty and inner light in all things mundane inspires me, and it is these moments of reverie that are embodied in the work.

“While it shares a common aesthetic with minimalism in austere and geometric forms, it departs from minimalism in its tactile nature and labour-intensiveness, in which it touches feminist art ideology.”

“The forms often derive from the geometry I find both in nature and the man-made, and range from completely mundane objects to sacred architecture.”

Her signature work for the Tokyo exhibition is Shadowfall Blue/Pink, painted in oil on medium-density fibreboard (MDF). This is an example where a painted surface is deliberately hidden, so that its shadow is of an unexpected hue.  This entices us on a quest of “finding the inner light in all things mundane.” 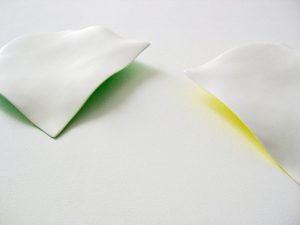 “My colours inhabit a sculptural space which enters and interacts with the real space of the viewer’s environment, and each entire work offers a meditative experience.”

Slow down to open your eyes and your mind – the lesson we all need to learn. The works of Yukako yield a satisfying fulfilment of her intention “to offer a contemplative atmosphere to the surroundings of the works, and a moment of clarity and serenity to the spectator.”