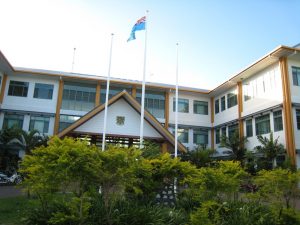 “The Greek market is huge and holds great potential for us, ” the spokesman told Allaboutshipping.co.uk. “Although the Greek market is mature with established players, we believe there’s still room for another player like us.”

The tasks ahead will not be easy, but the registry is up to the challenge.

Tuvalu is an island state located in South Pacific. Formerly known as the Ellice Islands, it gained independence in 1978 after more than eighty years of British colonial rule.

Like Greece, Tuvalu has a long and rich maritime history going back a long time. The country was first settled by the Polynesians who are well known as seafarers and for their seafaring skills.

Being located in the South Pacific is no impediment to its ambition of moving into Europe. Leveraging on IT, it is running 24/7. “Our computers never sleep nor does it take holidays, ” added the spokesman. It has its operational office in Singapore, strategically located in one of the world’s busiest and fastest growing maritime centres.

The Registry has a well diversified fleet of vessels, ranging from offshore support vessels to crude oil tankers. Oil tankers accounted for about 46% of the total fleet by gross tons. Tuvalu also launched its Yacht Registry in 2011 to offer competitive fees and first-class service to the yacht market.

Tuvalu Ship Registry has moved from the Tokyo MOU Black List to the Grey List in a short time span of 6 years and continuously strives to improve the quality of its fleet. Presently, also on the the Grey Lists of the Paris MOU, “…we are determined to make our way into the Tokyo and Paris MOU White List, ” said the spokesman. “It is not if, but a matter of when”

Tuvalu is cautiously expanding its network of agents in Greece so as to identify only quality agents who have the same vision and mission to grow with the Tuvalu Ship Registry in the region. “Personal ties are important. We need humans to work the ground, Computers can’t do the job, ” he said.

“We are still searching for partners to work with us to grow the ship registry in Greece and beyond. Be sure to visit Tuvalu Ship Registry booth if you are interested to work with us, ” he added.

Visit Tuvalu at  stand booth no. 2.520 at the forthcoming Posidonia exhibition in Athens

The winners of the “HELMEPA Junior” Panhellenic Drawing Contest are announced