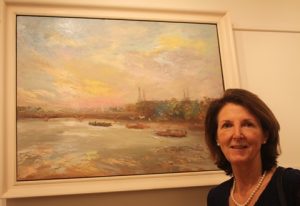 The skies are vast and imperious, but they enhance the land and sea beneath, rather than diminish them.  In her latest exhibition, London painter Lynda Minter brings work from her travels to Norfolk, Ireland and Scotland, in addition to Thames-scapes from her home territory.

As has been the case throughout her past 20 years as a full-time artist, Lynda elicits the drama of light – usually of the early morning variety – and pall playing through and with the clouds. One can gaze at her depiction of the heavens only with awe.

Lynda Minter with her oil on canvas A stone cottage on Doagh Isle, Donegal.

The works of humankind – sailing boats, a church, even the mighty Battersea Power Station – and relegated to a secondary place in nature. In one of her most striking pieces, entitled A stone cottage on Doagh Isle, Donegal, the cottage of the subject is just a humbled object, its features dimmed against the majesty of its surroundings.

A substantial canvas entitled Evening Sky, Malin Head, is overwhelmingly that: there is very little of the Donegal turf to be seen as it is overawed by the type of sky from which one half expects a Greek or Norse god to emerge at any moment.

Lynda’s show at the Piers Feetham Gallery, Chelsea, confirms her mastery of her medium, oils, worked with seeming ease into a shimmer of sea, waves, rain and even snow. While the sun remains offstage, its glow diffuses into hazy clouds, the light just short of achieving penetration. 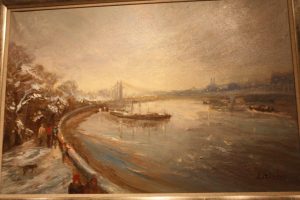 Snow along Chelsea Embankment. Oil on canvas. By Lynda Minter.

Many of the large canvases are based on her outdoor sketches in water colour. Her statement that “my paintings are about space, sensation and light, ” is a very mild description of the glorious results which inject imagination in modest and just measure into the scenes espied on her peregrinations.

She has a special sympathy for the Western Isles of Scotland, which clearly impressed her with their lovely green hue, but she returns constantly to her very favourite haunts – the Isles of Scilly, and the Thames, there from Putney Boathouses to low tide by St Paul’s.