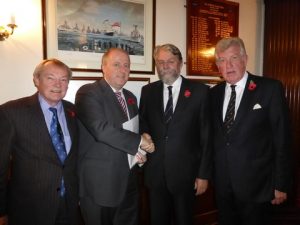 Propeller Club members had a great bonfire night treat at the recent lunch meeting as Alan Watson, Chairman of the Medusa Trust, gave an inspiring talk on the history & restoration of HMS Medusa ML 1387. Having been instrumental in the saving and restoration of the WW2 vessel and now as Commanding  Officer of HMS Medusa, Alan gave an overview of HMS Medusa’s journey since its build in Dorset in 1943. Jean Winfield, managing director of Jeanius Consulting, writes:

Medusa, or ML1387 as she was originally known, was initially intended for an anti-submarine role, protecting harbours from submarine incursions and is now the only seaworthy and ‘as-built’ vessel remaining of her class. At 72 feet, she was powered by two Gardner 8L3 diesel engines and was equipped with a Gardner 1L2 auxiliary. Her armament was a 2 pounder and a 20mm Oerlikon, with two twin Vickers ‘K’ machine guns, and six depth charges. She was built for endurance rather than speed with a maximum speed of 12 knots and an impressive range of 2000 miles.

In the spring of 1944 she joined the 149th HDML Flotilla and was based at Portland. She took part in Exercise Fabius 1, which was a practice assault carried out by the Americans at Slapton Sands in Devon. Medusa also took part in the ‘Operation Neptune’ naval part of the  ‘D’-Day landings, arriving off Omaha Beach on the night before the invasion and remaining on station for 30 hours as the Navigational Leader for approach channel 4. Medusa subsequently crossed to Ostend and from there took passage to IJmuiden where she accepted the surrender of the occupying German forces. From IJmuiden she navigated the North Sea Canal to Amsterdam, the first allied ship to do so. 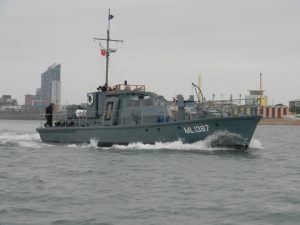 Post war, she was allocated to the naval reserve for a while and then became a Hydrographic Survey Vessel, responsible for South coast surveys with the pennant number A 323, and was finally named HMS Medusa in 1962. In 1968, she was sold for scrap and was in very poor condition however she was purchased by a group from Weymouth and then, over a period of eighteen years, was painstakingly restored to a seagoing condition once again with a view she would be restored to as near to its original form as possible. With initial restoration quotations being too high, Alan took over a derelict boatyard, taking back some of the staff and employing fifteen apprenticeships to work on the project as a training exercise – leaving a lasting legacy as the boatyard still remains long after the end of the project and the fifteen apprentices gained a long term career. Even a terrible fire at the boatyard part-way through the restoration work, severely damaging restored engines and parts, merely delayed the project and didn’t dampen the passion of the people working on the project and Medusa was eventually fully restored in 2010. Medusa was re-dedicated at a ceremony attended by HRH the Princess Royal on 21 October 2010 and was presented the vessel with a new ensign.

HMS Medusa took part in the 2012 Jubilee Pageant and this year celebrated the anniversary of ‘D’-Day, by having a veterans day, with over one hundred  ‘D’-Day veterans attending from all over the world, and then she travelled back to Normandy to retrace her ‘D’-Day steps. She is presently based at Gosport and is both an educational vessel and open for corporate days. The Medusa Trust was formed in 2002 to take ownership of the vessel and Medusa is entirely funded by donations and operated by volunteers

Alan’s presentation left everyone wanting to know more and to indeed visit Gosport where she is based, with many questions from the Propeller Club audience. The President, Ian Millen, thanked Alan and was delighted to present £260 raised by an impromptu collection around the tables by members wishing to support such a fantastic project.