ISWAN works with various organisations including the ITF, ICS (International Chamber of Shipping) Mission to Seafarers and Sailors’ Society, to directly serve seafarers providing welfare services which can be accessed by all. ISWAN is funded by membership subscriptions, sponsorships and a number of grant making organisations such as the ITF seafarers trust, The TK Foundation and Seafarers UK, as well as their own fundraising.

After an enjoyable lunch, Ian Millen – Propeller Club President, introduced Roger Harris and his background to shipping. Roger began by informing attendees of ISWAN’s important work with seafarers and the difficulties which still face seafarers around the world today, “Like any charity we want to change things. The change we want to see is to improve the life of seafarers’ worldwide.  We do this in a number of different ways; we support the front line welfare providers – Mission to Seafarers’, Sailor’s Society and the seafarer’s centres they run. Seafaring is still a tough and dangerous job. The deaths of seafarers at sea are estimated to be 1000 – 2000 people a year. Unfortunately these stories aren’t uncommon today. We have seafarers that call our help line every day.” 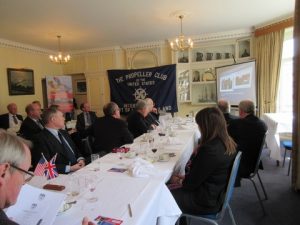 The ‘seafarerhelp’ is a free 24 hour help line which runs every day, 365 days a year. There are 10 staff members working at the helpline, speaking a total of 11 languages and various dialects to accommodate all seafaring nationalities. Seafarers can call from anywhere round the world, and ISWAN can provide information to seafarers in need, as well as running an emergency welfare fund for seafarers. Roger said “Seafarers contact us by a variety of means, through email and telephone, and increasingly web chat, as well as Facebook. Last year in 2014 we had 1920 new cases, this was up from 1257 cases from 2013, and one of the reasons why we have had this increase is partly because we are getting known a lot more. Seafarers’ centres around the world give out a card with all our contact details on, these cards are given to all seafarers, in various different languages. Particularly on Facebook, and other social media, we have a large following. We find this is a key channel where seafarers can get to know about us. Last year we helped over 7000 seafarers; in 2011 we helped less than half that amount. There has been a dramatic growth in the number of seafarers needing help.”

Roger continued, “We get a lot of calls just asking for information, for example if there is a seafarer’s centre in the port the seafarer is going to, salaries not being paid, and also getting more calls about seafarers wanting employment. A lot of our calls we refer to other agencies. For instance – the contractual salary issues we refer with the seafarer’s permission to the ITF. We do refer a lot of our other cases to Mission to Seafarers’, Sailors’ Society and Apostleship of the Sea. Where there isn’t a seafarer’s centre in the country where the seafarer is sailing to we then look for other organisations that can help. We frequently contact embassy’s, we have used the Red Cross before and other organisations such as that.”

Positive feedback shows 83% of the seafarers say the service from the helpline was excellent or good and 89% said they would recommend ‘Seafarershelp’ to other seafarers.

Roger finished his fascinating talk by raising the important concern of migrants, “An issue really important to seafarer’s at the moment is migrants at sea. What’s coming across in the press is the role of commercial shipping is playing in the rescuing of these migrants, and the role seafarers are play in rescuing these migrants. I think it’s really important from the seafarer’s welfare perspective that we take this issue up, and work with organisations to lobby the E.U into providing more equipment for search and rescue. As humanitarians we cannot allow this to happen, over 3, 500 people died in the Mediterranean last year, and this year it is going to be a lot more. I would like to thank the propeller club for inviting me here and for the kind introduction.”

The lunch was drawn to a successful end with Roger conducting an informative question and answer session with club members. The Propeller Club gave thanks to Roger Harris and ISWAN for the work they do in assisting and helping seafarers around the world. The event ended with a cheque donation from the Propeller Club to ISWAN to support their valuable work.

The next lunch event is on the 24th June at the Naval Club, this upcoming lunch will be host to Seafarers Awareness Week, highlighting ‘Opportunities to Work at Sea which takes place 20 – 28th June.