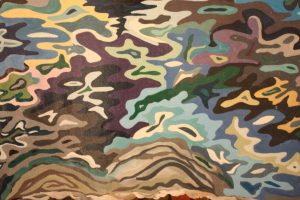 Paintings from Hiroshima: an extraordinary and touching exhibition in London at the Daiwa Anglo-Japanese Foundation

Tranquil street scenes, village landscapes, pig farming, chickens, festival fireworks – such are the subject of paintings by schoolgirls in Hiroshima and pupils from around Japan – just a few years after a nuclear bomb had exploded above the city.

No-one would guess from the mundane subject-matter (albeit depicted with skill beyond what might be expected from each age bracket, from six to 15) that the girls suffered the traumas and family bereavements caused by the first shocking deployment in history of nuclear arms.

Thus the significance of the paintings goes much deeper than being mere children’s artworks. Some years ago through a chain of circumstances, they came into the hands of Manchester-based artist and educationalist Mike Stevenson. He is what he terms their “custodian, ” and hopes that they will soon be returned to their natural home, Hiroshima, a city which remains deeply conscious of its legacy.

Mr Stevenson has been telling the harrowing and moving stories of the children who did the paintings, and of the likely future fate of what they created in class in the early 1950s.

For now, the paintings have been on show, until August 13 2015, at the London base of the Daiwa Anglo-Japanese Foundation, near Regent’s Park. They are in two collections: 34 of the exhibits were made by girls at a Methodist school in Hiroshima. More than 300 students had died at the school and its premises were destroyed, but it was quick to reopen as the city struggled to resume what normalcy it could.

One of several beautiful landscapes.

The second set is of 29 artworks by children of other schools collected under the auspices of Unesco in the 1950s by Dr Takuo Matsumoto, principal of Hiroshima Girls School.  Unesco’s programme for art education was aimed at fostering co-operation and harmony through international exchanges of children’s artworks.

A powerful atomic bomb was detonated above Hiroshima on August 6 1945, and three days later another was let loose on Nagasaki. The assaults on the industrial and seaport cities killed a total of between 200, 000 and 290, 000, according to various estimates, and radiation sickness tormented thousands more people for decades afterwards.

Residents of Hiroshima had been braced for an American bombing raid because the city’s military facilities and factories had been unscathed, but no-one anticipated the carnage that was wrought. In this 70th anniversary year of the bombings, a report by the International Committee of the Red Cross and the Japanese Red Cross Society has said survivors are still suffering from long-term health problems. 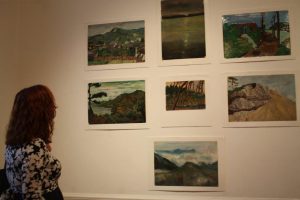 At his school, Dr Matsumoto managed to rescue 12 of the 62 first-year students.  Fifty others died, and several of those rescued died later. Many schoolchildren killed had been sent into the centre of the city to assist in clearing debris from the streets. Dr Matsumoto’s wife was killed and his daughter seriously injured.

Mr Stevenson read an account of a young girl who managed to crawl out of the heavily damaged assembly hall. She and a friend wanted to help the many who were trapped, but Dr Matsumoto came by and told those who could to run away because the raging fire was approaching. As they fled, the girl and her friend kept looking back and holding hands in prayer, and the cries for help of those who had to be abandoned haunted them forever.

Defying the horrors, the school resumed teaching in October 1945, and under the Unesco initiative Dr Matsumoto brought his two collections of paintings to the West, to be looked after by a British educationalist, Miss Prue Wallis-Myers, likewise a committed Christian. On her retirement, Miss Wallis-Myers entrusted the collections to Mr Stevenson.

He said that the paintings “show a concern with things that are simple and familiar” and “references to the dreadful experiences [of the devastation of the city] are surprisingly few. Instead we see the houses, streets and surrounding countryside, and there are references to festivals and celebrations. The young artists seem to embrace the familiar almost as an antidote to the unfamiliar events they have experienced.”

In his moving address during the private view evening, Mr Stevenson said:“I have worked throughout my life to ensure that all children have the right to benefit from an art education, ” but lamented that “the number of qualified art teachers in our schools has reduced by 11% in the last decade.”

He declared: “Many of our high schools at the moment would struggle to produce work of the quality you see [in the exhibition].” Some of the landscapes might recall those of the great Japanese painter Hiroshige and of Western movements such as Impressionism. Of the young artists, Mr Stevenson said: “They show a concern with things that are simple and familiar to their creators, which has characterised a great deal of art through many centuries and from many cultures. They have made the ordinary seem extraordinary to the rest of us.” 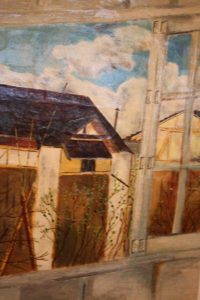 He continued: “It is in the arts that we find our humanity. It is when we forget our humanity that the tragedy and chaos begin.”

Of the fate of the paintings, Mr Stevenson said: “I am now able to decide they should be returned home to Hiroshima.  We have learned recently from the schools’ alumni association that a number of pupils [involved, believed to be about 14] are still living. They will probably be astonished to learn that the paintings last seen many decades ago have been used to inspire and stimulate students in the Northwest of England and have been shown in the House of Lords and in an exhibition like this [at the Daiwa Foundation.]

“In November the mayor of Hiroshima is to visit Manchester as part of the Mayors for Peace programme, and it seems likely that the paintings will be presented back to the Japanese city.”

The current name of the Hiroshima education establishment is Hiroshima Jogakuin Junior and Senior High Schools. 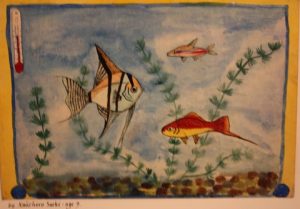 Mr Stevenson, who trained at Liverpool College of Art, where he gained the National Diploma in Design in Sculpture, taught in secondary schools, before moving into primary education, becoming head of an experimental primary school. He was prominent in visual arts educational development in Manchester, and in retirement from formal posts works as a painter of landscapes of Wales and the Derbyshire Peak district, and of other subjects. 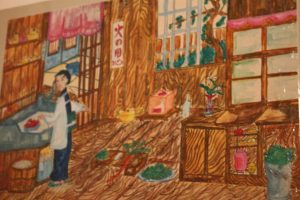 Mr.Stevenson said that he had worked to draw widespread attention in the UK to the paintings for the past two years, and the experience had been frustrating until he made contact with the Daiwa Foundation, and received wonderful support from Ms Shihoko Ogawa, programme director for the Foundation. 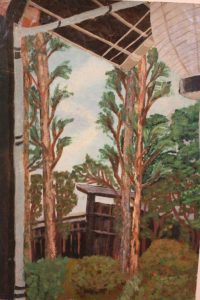 A scene with pine trees and a Lantern, by Onko Kamei, aged 15, Hiroshima Senior Girls’ School.