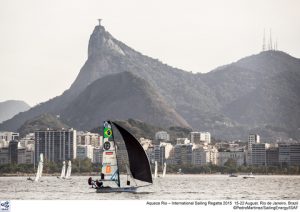 The Aquece Rio – International Sailing Regatta is serious business for the 326 registered sailors from 50 countries with high stakes and bragging rights on the line.

The Olympic Test Event is an opportunity for sailors to prove themselves as Olympic medal candidates to their National Olympic Committees and to set themselves apart from their rivals.

Many of the medallists seen at the Test Event will be on Olympic podium one year from now. Confidence and a can do attitude can be established this year in the build-up for the main event. 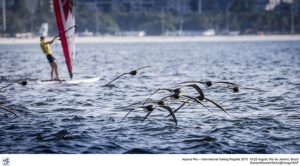 It was a long hard day for the competitors with a light breeze prevalent across all six racing areas. The hard working Race Committees put on seven races across the three racing areas inside Guanabara Bay with no racing possible outside.

Wednesday 19 August is expected to be one of the busiest days on the water as the fleets look to catch up on the schedule.

Across the six races so far, the fleet of 19 have pushed hard to stamp some sort of authority on their rivals with minimal separation on the race track.

Following a first race disqualification the Brazilians have been fully focused on the job at hand and sailed their way to a third and a first to advance up to first overall.

“The first day we had a protest so we thought, this is pretty serious, ” smiled Grael. “But it was good for us because we were like right, okay let’s watch out. We’ve had to be careful and not do any big mistakes, ” finished Kunze.

Keeping focused on the job at hand the Brazilians have not finished out of the top three since their disqualification and grabbed the lead for the first time.

Grael and Kunze, 2014 ISAF Rolex World Sailors of the Year, have an infectious attitude, bouncing off of each other yet remaining remarkably cool under pressure. After speaking in Portuguese to a cluster of Brazilian radio, TV and written journalists who view them as Olympic champions in waiting they took time out to speak to the English press and explained they feel no weight of expectation from their nation, the hosts of the 2016 Olympic Games.

“I think they are putting pressure on us, ” explained Kunze, “but between each other we don’t feel any pressure.

“We sail our own races without thinking about everyone too much. Today we never got under the fleet so it was easier to sail the race course.”

The 49erFX, Women’s Skiff, is the newest piece of equipment to the Olympic Games and will make its debut at Rio 2016. Since the boat made its debut at the 2012 ISAF Sailing World Cup Melbourne sailors have continued to adapt, develop and grow the attributes that it takes to win an Olympic medal.

Rio 2016 is less than one year away and compared to the 2014 test event, Grael can see a noticeable improvement in the fleet,  “You can tell that everyone has had a really good season in Europe and it shows here. 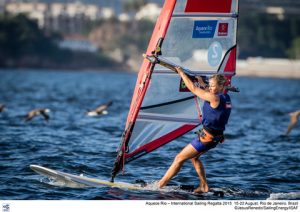 “A lot of teams have ups and downs. This week the Italians are having a good week and last year the Kiwis and the Dutch were good so it’s been up and down.”

Even though the Italians do not lead, their scorecard is the most impressive. A total score of 22 is the lowest in the fleet and could prove vital in the latter part of the competition when the medals are decided. For now, their net score of 12 sees them just one point off the leading Brazilians.

Comfortably positioned in second place a medal at the test event is more than a sign of success for a good week of racing for the Italians as Conti explained,  “For us this event is really important because if we make the podium here then we’ve qualified for the Olympics. It is a test event but we are fully concentrated and for us, it’s like the Olympics.”

The Italians have been one of the leading teams in the 49erFX, continuously striving for success and the podium. Conti continued,  “We’ve been working a lot and we’ve been training in Rio a lot. We have focused more on ourselves this week and tried to keep the boat fast and to keep our heads out of the boat.

“We’ve put what we’ve learnt over the last few weeks into practice and today we had a fourth and a second. We are really happy about the result because today could have been bad if you missed a start so we’re really happy.”

Argentina’s Victoria Travascio and Maria Sol Branz continue to impress in Rio. The Pan-American Games gold medallists are one of the lightest crews in the 49erFX and therefore revel in the light breeze. Six top seven results gives them third overall going into the fourth day of 49erFX racing. 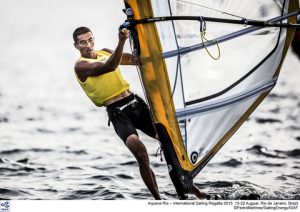 Gintare Scheidt (LTU), a Beijing 2008 silver medallist, is using her years of experience to her advantage in the Laser Radial and has opened up a seven point lead after she took her second race win of the week.

Scheidt is the only Laser Radial sailor with six top ten results and won the single Laser Radial race of the day convincingly. She remains a calm persona in the boat park and on the water, keeping her cards close to her chest,  “I will not tell my secrets, ” joked Scheidt. “I just keep doing the basic things. As a sailor I don’t always concentrate on things like the current which many sailors do. Many of them forget about the basic things so I keep it simple.”

Light breeze can make for tense racing in the Laser and Laser Radial. As Scheidt explained, doing the basic things right can earn a sailor good results even in the tightest of situations,  “Rounding the first mark there was just no gap in the fleet. It was just boat, after boat, after boat, ” explained Scheidt.

“I managed to round in fourth which was very good for me. I was close to the girls in front and then on the second upwind I did well and then on the downwind I was able to stretch and win the race.”

Scheidt finished clear of China’s Dongshuang Zhang who moves up to eighth overall. Paige Railey (USA) came through in third and sits second.

The single Laser race was won by Tom Burton (AUS) who has found his feet after a difficult start. Burton has picked up the last two Laser race victories and has pushed up to fourth overall.

Consistency has been hard to find in the Laser fleet this week. In days gone by, the likes of Burton and Tonci Stipanovic (CRO) have been able to march ahead of the pack, but not on Olympic waters in an event that will virtually mirror the Olympic Games.

Francesco Marrai (ITA) and Lee Parkhill (CAN) have launched their names into the spotlight this week with astute performances. Marrai holds the lead on 28 points with Parkhill two off of him.

China’s Aichen Wang has opened up an impressive 20 point lead in the Men’s RS:X by snapping up double bullets on the Pão de Açúcar racing area.

Wang comfortably won both of the day’s races and has put himself in a winning position heading into the penultimate day of the RS:X competition. If he continues along the route he’s going now, the chasing pack will be hard pressed to catch him.

Just one race was possible in the Women’s RS:X with the race win going the way of Hei Man Chan (HKG). She is now sixth overall. Malgorzata Bialecka (POL) holds the lead after a fourth.

It’s set to be an incredibly busy day on the water on Wednesday 19 August. All six race courses will be utilised with all fleets on the water. In total, 28 races are scheduled.