Growing up in the USSR: Images of a Bygone Age…

Growing up in the USSR: Images of a Bygone Age. Paintings selected by British art dealer John Barkes

Sentiment and tenderness, and splashing about in the sea on sunny summer days are rarely associated by outside observers with life in the Soviet era, but as everywhere families sought to shelter their children from harsh realities.

Several generations of artists depicted the caring and carefree side of the family circle, even when the creative mind was under considerable social pressure.

John Barkes has had a decades-long fascination with the struggle of Soviet-era artists to express their individuality. Mostly, such artists, who for several years were out of favour in the mad rush to a free-market economy, have responded happily to his passionate interest in their oeuvre.

Black Sea Summer, Gurzuf. 1973. Oil on board. By Grigori Shponko.

The UK art dealer has been welcomed into hundreds of studios and browsed through countless stacks, shelves and cupboards of paintings and drawings which might have been forgotten for ever, even though most of the trained artists had long and productive careers.

Dr Barkes has launched a catalogue of paintings from Russia and Ukraine entitled Growing Up in the USSR 1950-1989: Images of a Bygone Age. In the first instance, this unique book will support his presence at the latest Decorative Antiques and Textiles Fair,  September 29-October 4 2015, at Battersea Park, London.

He has featured 27 artists. They painted family life, uninhibited by official constraint, as it unfolded around them. From their easels came charming work, far from the stilted style that was deemed mandatory in the Stalin era. One of the artists in the catalogue, the late Valentin Bernadski of Simferopol, was thrown out of art school and classified as an enemy of the people – his father had been shot in one of the purges. Fortunately Bernadski was rehabilitated thanks to war service, married a fellow artist, and reaped artistic success. 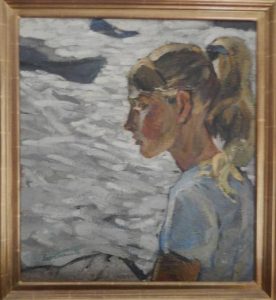 In fact the artists usually gained official sanction and commissions from the Artists’ Unions, so that their work might be selected to hang on the walls of state institutions, schools, hospitals or youth organisations.

Despite undoubted economic hardships, there is no sign of that, as the subjects of the paintings revel in pastimes, and there is a wonderful sense of freedom especially in the paintings of seaside excursions.

One of the most charming photos in Dr Barkes’s catalogue is of Valentina Kharaborina in her studio, with her 1970 self-portrait. Her studies of her daughter Tanya are brilliant, says Dr Barkes. “I was astonished when I found them on a shelf high up in her studio, and I will always be astonished by them.”

One work is a sketch (oil on board) of 1962 entitled Homework, and we see an older Tanya presumably enjoying a holiday by the sea, in a 1970 oil on canvas, the teenager’s calm demeanour a reflection of the gently rippling waves.  Ms Kharaborina is one of a talented group who have worked within the Simferopol (Crimea) Union of Artists.

Valentina Kharaborina in her studio, 2005, with her 1970 self-portrait

Grigori Shponko (1926-2995) of the Kiev Union of Artists was adept at capturing the joys of youth in oil paintings committed to board. As with adolescents the world over, they love being by the water, exemplified here in a delightful 1973 cameo, in Black Sea Summer, Gurzuf,  of three boys frolicking among the rocks. The town in question is a small Yalta resort now claimed for the Republic of Crimea with a picturesque mien that has attracted many artists over the years.

From the northern side of the Soviet sphere came Viktor Otiev (1935-1999) of the St Petersburg Union of Artists. His study for Turbulence of 1968 shows riders plunging about in fairly shallow waters near the shoreline, at ease controlling their young horses amid the swirling currents. One of the many talented students to come out of the Leningrad Ilya Repin Institute of Painting, Sculpture and Architecture, Viktor Otiev often featured equestrian motifs, and is represented in collections in many countries.

Even more recognition was given to Mikhail Zhuravlev (1952-2014) during his fairly short life, finding an international market in Paris where, says Dr Barkes, entire auctions were devoted to his output.

“Mischa Zhuravlev was one of the kindest, funniest and most original people I have ever met, ” says Dr Barkes, who bought at least 40 of his compositions from his studio.

The Zhuravlev style is of a different lineage than most Soviet artists. Featured in the current catalogue is an oil painting on canvas showing a family in their summery (and slightly old-fashioned) finery amid their luggage, ready to board a good old-fashioned steam train.  The picture is called Miranda Station. The artist was a film set designer, and member of the St Petersburg Union of Cinema Artists, so possibly Miranda is a fictional resort. All this was a long way from his years growing up in the Ural steel industry belt.

Dr Barkes says he refuses to buy any painting where “the heavy hand of Socialist Realist dogma has transformed the individuals portrayed in the sketches into stereotypes of the Soviet ideal.”

He recommends for further reading on Soviet childhood and teenage years books including Confessions of a lapsed standard-bearer, by Andre Makine; A Mountain ofcCrumbs: growing up behind the Iron Curtain, by Elena Gorokhova; and Children’s World: Growing up in Russia 1890-1991 by Catriona Kelly.

December lectures in the Friends room at London’s...