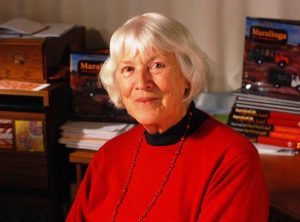 From 1956 to 1963, some 1, 200 Aboriginal people and military personnel were exposed to radiation from nuclear tests at ‘remote’ Maralinga, on South Australia’s Woomera rocket range.  Among those who were victims of radiation was the family of a respected artist and community leader, Yvonne Edwards.

Yvonne was just six years old when the first bombs were detonated. She longed for years to tell the world her story – four generations of her family suffered – and was fortunate that Christobel Mattingley, a distinguished author of more than 50 books who is deeply sympathetic to the historic plight of Australia’s first nations, set it down from her recollections. Sadly Yvonne died before her account would be put together as Maralinga’s Long Shadow: Yvonne’s Story.

The book launch will formally take place on June 2 2016 during National Reconciliation Week which “celebrates and builds on the respectful relationships shared by Aboriginal and Torres Strait Islander people and other Australians.”

Weapons blasts were carried out in the outback by the UK Government with the blessing of Canberra, despite totally inadequate protection for British and Australian soldiers guarding the site and for families living a few kilometres away.

Christobel told us that the British nuclear test series “did untold damage to the Anangu people and their traditional country, and in addition, to the service personnel based there throughout the tests, as well as to other Aboriginal groups and other communities further afield which suffered fallout when weapons were tested in unsafe conditions.”

Said the Adelaide-based author: “I became a campaigner against nuclear energy in the 1960s, obtained the report of the 1984 Royal Commission into British nuclear tests in South Australia and wrote about the Maralinga tests in Survival in Our Own Land: ‘Aboriginal’ experiences in ‘South Australia’ since 1836,  (1988).  In 2006-07 I worked with a group of senior Anangu women to tell their story in Maralinga: the Anangu Story (2009).

“Yvonne Edwards was the best informant and best artist, and asked me to help her tell her story in her own book.

“Her uncle, her sister and her husband had already died of cancer before I met her, and before we could begin, two sons died of cancer and the two children of another son were born with genetic defects.  So Yvonne was too devastated to be able to paint.

“She was unable to begin the work [on the book]. She finally contacted me in 2012 saying she was ready to begin, but collapsed within a week, and after 22 days on life support, died on April 7.

“Her sudden death, aged 61, meant that for cultural reasons I could not work on her story for two years.  I have now told her story with the approval of her family and community.”

Christobel continued: “Now fortuitously as the 2015 South Australian Royal Commission into the Nuclear Fuel Cycle is about to release its report,  Maralinga’s Long Shadow has just been published.

“It is to be hoped that Yvonne’s story and her voice from the grave will bring new recognition of the long term risks associated with nuclear energy as well as the devastating human costs from the Maralinga test series.”

Christobel quotes Yvonne as saying of one bomb explosion, people “thought it was mamu tjuta, evil spirits, coming. Everyone was frightened, thinking about people back in the bush. Didn’t know what bomb was. Later told it was poison.”

The worst contamination was said to have been released by trials of nuclear warheads in the early 1960s. The fallout continued to cause cancers and bodily defects. Three official attempts were made to clean up the site and the federal government formally handed it back to its traditional owners.

Several books have been written about Maralinga, but praise has been accorded to Christobel for ensuring that the shameful affair is remembered in such telling form.

Yami Lester, who went blind at the age of 16 possibly as a result of the nuclear testing, and who was awarded the Order of Australia medal in 1981, said: “Christobel Mattingley is a fine writer. This is a very special book to be read by any age group interested in real Australian history.”

The Rev Canon Peter Patterson described Christobel’s book as “a very moving account of Yvonne Edwards’s life story. As the ‘last man standing’ (with difficulty) from the cluster of army chaplains who – like many of Yvonne Edwards’s family and friends – died of radiation cancers, I endorse the powerful message ofMaralinga’s Long Shadow. I am convinced that the Maralinga mistake needs to be made more widely known.”

Australian poet and historian Graham Jenkin said that the book was “an outstanding work of non-fiction. By recording and documenting the life of a remarkable woman who lived through one of the most deplorable episodes in Australian history, Christobel Mattingley has done the nation a great service…No-one who reads this book will forget Yvonne Edwards and her inspirational life. She was a true heroine, of whom all Australians should be proud.”

Christobel, who lives in the foothills of Adelaide, has published 44 books for children and nine works of biography and history, some of them translated into other major languages. They include My Father’s Islands, published in 2012 by the National Library of Australia, about the Dutch explorer Abel Janszoon Tasman and his voyages of discovery around Australia and the South Pacific, told from the perspective of his daughter.

She has received many awards for services to literature and commitment to social justice and cultural issues, including the Advance Australia Award, the inaugural Ekidnas Lifetime Recognition Award for her outstanding contribution to the creation of Australian children’s books, and the Unesco (Adelaide Chapter) Award. She is a Member of the Order of Australia.

Her first pieces written at the age of 10 while she was living in New South Wales were published in the children’s pages of the Sydney Morning Herald and the nature magazine Wild Life.  Her father was construction engineer for the first road bridge across the Hawkesbury River, and she would sit in the sandstone caves nearby wondering what it was like to be Aboriginal before the Europeans came to Australia. She says on her website: “I used to read the lists of beautiful Aboriginal place names which were like music, before I went to sleep.”

Maralinga’s Long Shadow is a partnership project between Allen & Unwin and Nuclear Futures, a three-year programme of arts activities originating in Australia and extending across six countries and which “supports artists working with atomic survivor communities, to bear witness to the legacies of the atomic age through creative arts.”  For more details, see www.allenandunwin.com  and www.nuclearfutures.org

Christobel has meanwhile released another work,  Forward March,  a picture book about the Anzac Day march. It was launched at the school where her husband David taught for 32 years, with 120 boys aged from four to six asking questions of her, of the illustrator David Kennett and of the veterans she invited to the event.

She wrote Forward March in 2005, after coming home from watching the march in Adelaide, as she does every year with her husband, a World War II veteran.  “Each year tears fill my eyes as I see more and more how the ageing (Australian and New Zealand Army Corps) veterans are limping and hobbling and shuffling as they courageously make the trek to the Cross of Sacrifice in the gardens by St Peter’s Cathedral, whose bells ring out in commemoration.”

Publishing interest for Forward March had to wait until 2015, the 100th anniversary of the fateful landing at Gallipoli. It became one of the last publications from Omnibus Books before that imprint was closed by Scholastic Australia group.

A Leap of Faith