Viewers might be interested in this letter sent from the International Chamber of Shipping addressed to Hon. U Thant Sin Maung (Myanmar Minister for Transport), concerning recent changes to Myanmar’s national cargo collection and release policy, which ICS believes contravenes the spirit of customary international practices and may lead to considerable market distortion.

For additional context we have also attached a translated version of Myanmar Port Authority Notification No 26/2016, which informs of the changes in question.

Union Minister for Transport and Communications

Ministry of Transport and Communications

I am writing on behalf of the International Chamber of Shipping (ICS), which is the principal global trade association for shipowners, representing over 80% of the world merchant fleet, with a membership that comprises national shipowners associations from 37 countries.

We understand that on 11 October 2016, the Ministry of Transport in Myanmar amended its cargo release policy. Following a thorough assessment of the amendments contained in Myanmar Port Authority (MPA) Notification No.26/2016, it appears that the new policy, among other things, determines that:

• Shipping lines are to use a uniform tariff when collecting surcharges (detention charges) from consignees who fail to return their containers on time.

• Cargo will be released upon presentation of the Bill of Lading (B/L) directly to the Shipping Agency Department (SAD) without proper consent from shipping lines, and before the settlement of ocean freight and charges between consignee and shipping lines.

• The local surcharges (apart from detention charges) that shipping lines can collect are now determined by the Myanmar Government, instead of individual carriers as is customary around the world. Collection of local surcharges has been restricted by the MPA.

• Shipping lines are required to collect detention charges at container depots/terminals instead of the line’s or shipping agent’s office, to assist consignees.

Shipping lines are prohibited from charging Delivery Order (D/O) fees
ICS is very concerned that these amendments to the cargo collection and release policy in Myanmar contravene the spirit of customary international practices and may lead to considerable market distortion. In particular, our concerns are based on the premise that:

• MPA and SAD have instructed all depots/terminals to stop following the normal process previously agreed with shipping lines, whereby they were required to verify that payment of detention charges had been made by customers prior to acceptance of empty containers into the depots/terminals. This means that the risk of customers using maritime carriers’ assets (containers) to store their cargo without return containers is high, as is the risk of container lines not being able to collect detention charges

• The new procedures regarding release of cargo (including checking the Bills of Lading and issuing Release Orders), which will be solely managed by SAD without any involvement from maritime carriers, places carriers in a vulnerable position due to the risk of incorrect cargo release, risk of failure to collect ocean freight and charges from customers, and renders this process susceptible to potential fraud.

• In line with customary international practices, detention charge fees are stipulated by the respective carriers and not by governments, as is now the case in Myanmar. In addition, D/O fees are a kind of international business custom levied all over the world.

• The use of uniform surcharges and tariffs would put ships calling at ports in Myanmar at a significant disadvantage to those calling at other ports around the world, as the latter are able to independently stipulate these fees. This would lead

• Although shipping lines are now purportedly required to collect detention charges at container depots instead of the shipping agent’s office as is customary worldwide, it has been reported that in most cases there are no personnel available at the allocated depots to oversee this process. Shipping lines are therefore concerned that this new regime would lead to confusion regarding responsibilities for calculating the rate/amount of detention charges and collecting those charges. In this context, we urge the Government of Myanmar to revert to the previous arrangement, whereby the collection of detention charges was conducted by shipping agents (in their offices) on behalf of shipping lines.

• While the Government now decides which depot/terminal location customers must return empty containers to, liners have reportedly experienced significant difficulty in liaising with SAD, to ensure that this process is as effective as possible (SAD reportedly does not follow instructions from shipping lines). As a result there are reports of a significant overflow of containers in some depots. Equally concerning are reports that the cost of moving containers to the correct locations will also sit with the shipping line.

In light of the above information, ICS respectfully urges the Myanmar Ministry of Transport and Communication – in co-operation with the MPA and SAD -to reassess the negative impact this change in policy is having on the wider shipping industry, as well as the supply chain. Moreover, it would be highly appreciated if the Government would take into account the view of all interested industry stakeholders, by conducting a thorough public consultation on the matter

We sincerely hope these comments and proposals are constructive and remain willing to engage further on this issue, should it be deemed necessary.

His Excellency Mr. Kyaw Zwar Minn (Ambassador Extraordinary and Plenipotentiary of the Republic of the Unionof Myanmar to the United Kingdom of Great Britain & Northern Ireland) 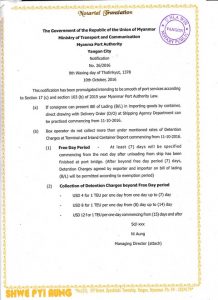