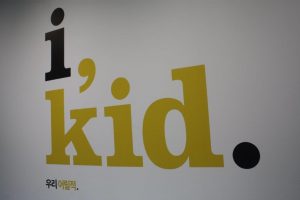 Childhood is steeped in innocence and joy, wherever conditions permit. Twenty-six artists living or working in the UK who have family origin in Korea created beautiful installations and performances illustrating that theme, for an exhibition from January 16-28 2017, called I, Kid. 우리 어릴적.

The wonder of rainbows, collections of 1,000 paper cranes, stepping stones over a brook, an allotment garden with spring onions. The memories flooded back for the participants. 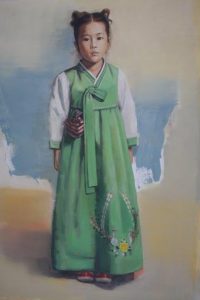 Girl in Hanbok. By Eunjung Seo.

The show was the brainchild of the Korean Artists Association UK, and the venue was the Korean Cultural Centre UK, an impressive building with entrance in Northumberland Avenue, Whitehall. Jeung Hyun Choi, chairperson of the association, extended special thanks to the centre for its sponsorship alongside the Korean industrial giant Daewoo Shipbuilding & Marine Engineering. “We are very grateful for their on-going contribution and commitment for the Korean arts,” Ms Choi said of the shipbuilding group.

She wrote in the catalogue that I, Kid. “is a representation of our childhood and experiences from our past, which have shaped us, yet are still living within us”.

Guest curator Seoyoung Kim said: “Childhood memories are special to all of us. They do not disappear, but are planted in our hearts and heads, like seeds. The moments of childhood events often grow into something strong, magical, beautiful or ugly. They have formed us – whether we like or not!” added Ms Kim.

Among the exhibitors, Eunjung Seo showed three charming oil paintings on canvas, under the title Girl in Hanbok. A hanbok is a colourful Korean dress. Ms Seo says in the catalogue: “The life of a child is widely mediated as a series of sweet events, although childhood might better be curated as a discovery of the world, accepting its reality, and its mixture of happiness, disappointment and sadness. Here, I can feel my mother’s love, as she dressed me in a lovely green Korean traditional dress and had my picture taken. This portrait revisits this mysterious, character-forming stage of my life.” 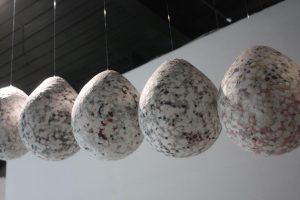 A virtual reality installation, recalling streets of the 1970s, was created by Sang Gun Kim, Alex Moon, Chaguk Ku, Dongsub Woo, Hyunju Cho, Rokly Wang, Sol Lee and Jun Seok Kim. “All those small streets on the way to school and around my house were my playgrounds. They were boys’ football pitch and hopscotch ground, and places for girls’ favourite elastic string play and jackstone play.” Since then, in Seoul such small, winding streets have been replaced with wide, straight streets between massive skyscrapers. Children have vanished into their own indoor or computer game play spaces.

Sunim, who has studied sacred art, used soil, seeds and recycle boxes to recreate My small farm. “My mother had an allotment in front of our house when I was growing up. She grew chillies, lettuces, tomatoes, cucumbers, aubergines and more.” Sunim liked watching cartoons on television, but had to jump up to gather spring onions and other vegetables for the evening meal. “I didn’t understand why my mother put so much efforts and labour into growing trivial vegetables. However, growing vegetables continued to be part of my life when I left home and lived in a Buddhist temple. Whenever I missed my mother and had troublesome thoughts, I went out to stand in the middle of the temple allotment. I now look after my own allotment in front of my studio in London. I grow potatoes, tomatoes, chillies and cucumbers.” 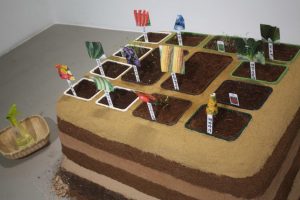 My small farm. By Sunim.

Cocoons of rice paper, papier-mâché, white paint and balloons were made by Jeong-Min Moon under the title Life-16. 2016. The reference is to her parents’ silk farm, when she had to help prepare food for the silkworms.  “I saw the silkworms growing from larvae to pupae, building cocoons, and finally coming out from cocoons as moths. They taught me the beauty and mystery of a life.” In the exhibition, the suspended “cocoons” cast fascinating shadows on the floor.

A tapestry and textile specialist, Magenta Kang used driftwood, dyed wools, cottons, and sand to create Memory of Rainbow.  She was brought up in a small fishing village on the east coast of Korea.  “One of the most vivid memories from my childhood is that of looking up from the sand as rain suddenly came down, and seeing a rainbow at sea which appeared to come to ground at the end of the beach.  I chased the rainbow along the beach but of course it always ran ahead and away from me. I cried and fell asleep on the sand.” 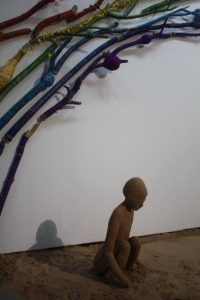 Memory of Rainbow. By Magenta Kang.

Sculptor and ceramicist Sarah E Choi crafted a two-part work entitled 1963-1964-2017. This is in stone, textile and mixed media. As a little girl, Sarah was taken to live in her grandparents’ countryside house because her father was unwell. This was 200 km away from the big city. “There was a little brook with a few stepping stones which enabled me to cross from my granny’s to the field and the mountains where I could find everything I enjoyed — all kinds of flowers, wild spring vegetables, autumn fruits, butterflies, trees on the mountains. Crossing the brook with the stepping stones was a real fear for a three-year-old girl. It was like a river to me. In later years I realised how small it was, but nothing could stop me jumping the stones to the other side, even though I often fell into the water.

“I still dream of jumping on one stone to another full of anticipation as if I can catch the rainbow from the other side of the brook.” On a gallery wall near the recreated stones, Sarah added six small panels with inscriptions against a background of old newspapers chronicling dictatorial times, juxtaposing those with one from 2017 packed with references to the major events of the last 12 months, including the Brexit vote, the US election, the battle for Aleppo, and references to divisive political figures and discrimination. 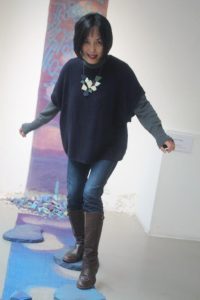 Suki Berwick recalls the rock-scissors-paper game and “we played on and on until twilight fell on, forgetting all about our dinner time. My mother would look for me calling my name all over the village.” Suki presented acrylic panels entitledNostalgia over Millennium Bridge, two of them as Days of Napping. 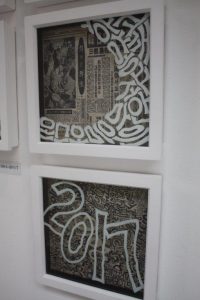 Sungyoung Park had a striking acrylic on canvas entitled For the Moment which refers to the days when street sellers sold chicks from cardboard boxes. Children collected them as pets, but the birds would survive only for a few days.  The cruel practice ended some time ago.

On the opening evening of the exhibition, 10 performing artists, presented their reflective works in music, dance and poetry on their childhood.

In 2017, the Korean Artists Association UK is celebrating its 20th anniversary. Its members are professional Korean artists who are first or second generation migrants in the UK or who are studying there.  It has associate memberships for non-Korean professional artists. 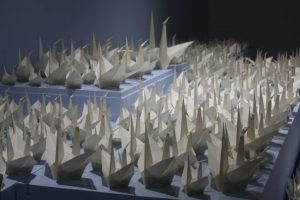 The director of the cultural centre, Hoseong Yong, said that its partnership with the association provided an established platform for Korean artists in the UK to present their work to the widest audience possible.

Further information is at www.koreanartists.co.uk