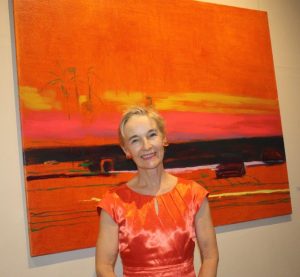 One feature dominates the paintings of Sarah Butterfield – the bright, buoyant colours with which she gloriously illuminates such themes as sunrise and sunset over the ocean.

Almost all her 50-plus oil paintings on canvas and board on show at London’s D Contemporary Gallery are endowed with this quality, encapsulated in the title of the exhibition Light Catching Fire which runs until April 11 2017. 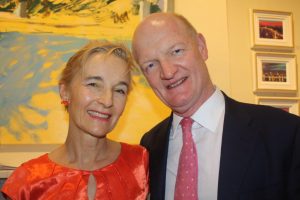 Every wall of the elegantly-appointed gallery is ablaze with the resplendent reds, blues and yellows that are integral to this established and energetic artist’s way of proclaiming her world view.

She offers new ways of looking at scenes in the Solent, at nearby Hayling Island, by the Thames, Cape Cod (Massachusetts), and the metropolises of Shanghai, Beijing. Even the haze of mega-cities and menacing clouds fail to block the sources of the exhilarating, rapturous light captured so dashingly by Sarah. Just the opposite: the clouds do duty as bold reflecting agents. The colour is hypnotic and almost subsumes the detail – which is there when you look for it. 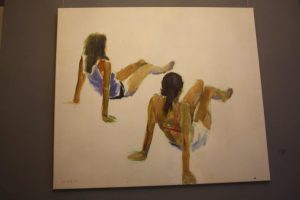 At the Ocean VI.

Notable in her oeuvre is the persistence of the sea. She says that when you stand on the sea shore, you are aware it is a very elemental place and visually compelling.  With the portrayal for instance of two figures at the ocean, the sunlight is intense and reduces people to a few shapes of shadow. You see how people’s skin tones can merge with those of the ocean.

By the ocean, you feel life is stripped down to its essence, she observes.  It is wonderful when everything falls into place – the endless dialogue between the sky and the water when you are there… clouds forming, similarities of colour … it is a moving tableau and it changes minute by minute. 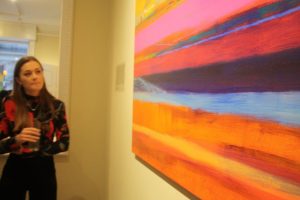 “This affinity with the sea makes me think of theories that life originated in the sea, and makes me feel we are very much one,” says the artist.

The engagement of the water with skin tones can be seen in her portrayals of figures at the ocean, where the background is burnished sand. 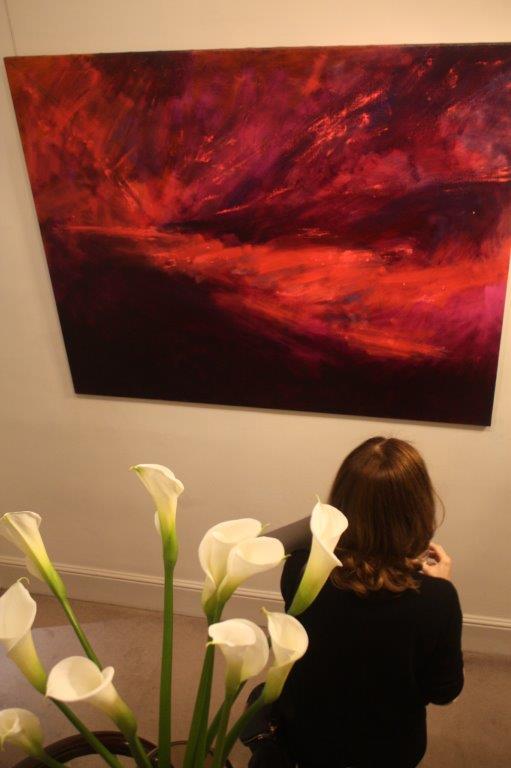 In some of the seascapes there is but sketchy evidence of urban life – a vehicle, road, street lights.  Such is the case in Ocean, lights and palms – but with distinctive colours like these, who needs a clutter of traffic. The exceptions are compositions characterising Shanghai and Beijing where the skyscraper culture insists on its say, as does the lower-key cluster of buildings along the Thames. The neon of Chinese mega-cities is a fact of life and light. In the London hinterland, Sarah picks out the artificial lights of the street, in locales such as a café in Sloane Square or Ravenscourt Park tube station at night.

After the urban excursions and diversions, though, it seems that the greatest rapture is at the edge of the ocean where so many strands and bands of colour challenge each other, leaping from Sarah’s primary palette.

One of the most dramatic pictures, of evolutionary force, is at the entrance to the exhibition: Cosmos XVII Event Horizon. This is one of the largest on show, at 122 cm by 153 cm, and makes us ponder the enormity of the firmament. The gallery comments: “As Prof Brian Cox [expert in particle physics and a broadcasting presenter] tells us, the physical laws of nature are the same out in the Solar System and beyond as they are here on Earth. Sarah exemplifies this by painting a picture in which you do not know if it is a distant cosmic event or a natural scene from here on Earth or even some industrial process. The Laws of Motion are the same in each case.” 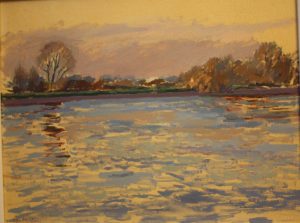 On another occasions, Sarah has said: “I wonder if the reason we are drawn to starlight, jewellery and light on water is because it makes us think about the origins of life,”

Many of Sarah’s smaller paintings of sunrises and sunsets were realised on the spot at dawn and dusk, including the paintings of the Thames in winter light.

Sarah’s previous major shows were solo exhibitions called Visions of Paradise at the Cultural Palace of Nationalities in Beijing and the China National Academy of Art in Hangzhou in 2016. 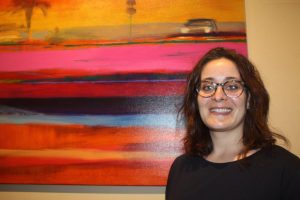 She has exhibited at leading London galleries and in 2006 was commissioned as the oﬃcial tour artist with the Prince of Wales on the Royal Tour to Egypt, Saudi Arabia and India. An exhibition followed at the Indian High Commission in South Audley Street, London, and the Prince of Wales has two of the works. Another salient year for her was 2012 when she painted the Thames Diamond Jubilee Pageant (the Queen owns two of her pageant paintings) and marked the London Olympics with a series of sports paintings.

Among those at the D Contemporary private view was her husband Lord David Willetts, who was, when Conservative MP for Havant, minister of state for universities and science until 2014 in David Cameron’s government. He chairs the think-tank Resolution Foundation. 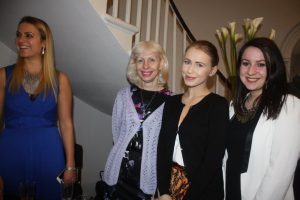 The event coincided with the first anniversary of the gallery, for which Lisbon-born Mara Alves as curator and manager is winning adherents. The venue opened in March 2016 with an exhibition entitled Portugart featuring 20 Portuguese artists and supported by the Portuguese embassy in London. Mara is herself an accomplished painter; her most recent works have included figurative illustrations of Portuguese proverbs such as Every Dog has his Day, and Donkeys’ Voices do not reach the Sky.

D Contemporary is an enterprise of the privately-held Strategy International Group which operates two UK and international membership-based business networks comprising more than 200 companies and institutions employing some 6m people. The company says: “Strategy International enables and develops entrepreneurial leaders and managers to succeed, to thrive and to grow to their full potential. We achieve this through training, consulting and coaching, from strategy and business design, to ensure effective and efficient performance delivery.”

Strategy International says that its hosting of exhibitions reflects and supports its strong commitment and that of many of its members and clients to the arts as a way of expressing their values and inspiring their stakeholders.

Another volatile week – thanks to the Capers and Panamaxes