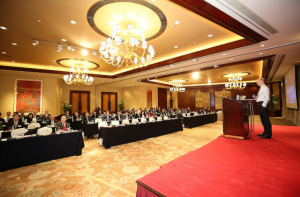 These regional Forums demonstrate the Club’s strategy of providing Members with a local personalised service, backed by a global presence in the market.

The Asian Members’ Forum outlined Britannia’s strategy, which has included the Club strengthening its presence in the region, with its Managers having recently taken over a longstanding Exclusive Correspondent with offices in both Tokyo and Kobe, Japan (renamed Tindall Riley (Britannia) Japan Ltd).

More announcements will follow in the coming months involving the Club’s initiatives in Hong Kong and Singapore.

“The Asian Members’ Forum is an important event given that half of our membership is based in the region. Enhancing our personalised service to Members by having dedicated Britannia owned local offices in key territories is vital,” said Andrew Cutler, CEO of Britannia and the Managers.

“The recent re-branding of the Association has been received positively by Members, reinforcing the aim of an accessible, modern and progressive Club backed by sound financial management,” Mr Cutler added.

The Board recently announced there would be no P&I General Increase to its advance call for 2018/19.  A further USD10m capital distribution was also announced to P&I mutual members based on premium for ships on risk at midnight BST 17 October 2017.

Britannia also stated that there would be no General Increase for 2018/19 to its advance call on FD&D with the Club now paying the first USD7,500 of costs (up from USD5,000) for any FD&D dispute free of deductible.

As further evidence of its financial strength, Britannia has set its P&I and FD&D release calls for all open policy years and 2018/19 at 0%.

Intermodal Europe 2017 – The Smart Shipping Revolution; what does the future look like?