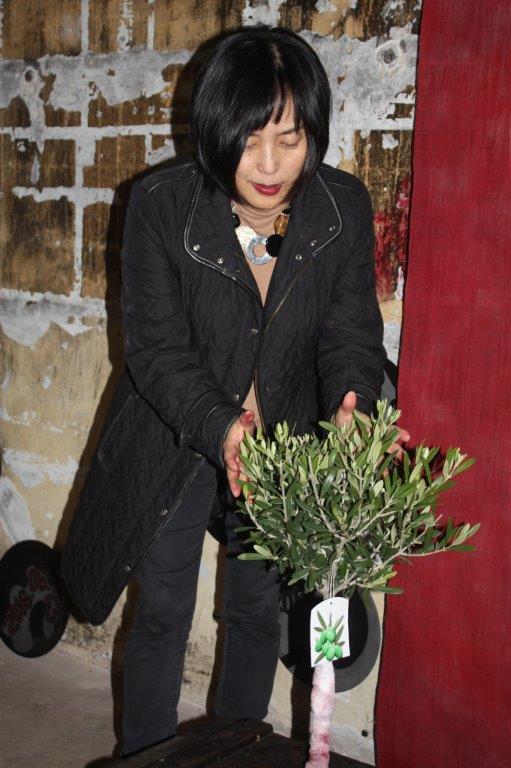 Very old and very cold – that was the immediate verdict of one early visitor on the Thameside venue the Bargehouse as she stepped inside for its latest art exhibition.

The show, entitled Butterfly Effect: Voices of Korean Contemporary Artists was in fact a hotspot for experimental installations with a warmth of ideas; and as the crowds arrived – many of them from the Korean community throughout the UK – for the private view, they brought with them a relaxing geniality.

Over four floors of the Bargehouse, which once was a warehouse for cargoes of meat delivered by barges tying up at Oxo Tower Wharf, 54 artists laid out bold essays on the theme of humankind’s treatment of its physical and social environment.

The Butterfly Effect is a term used in Chaos Theory: a butterfly flapping its wings on a mountainside can set off a chain of circumstances that leads to drastic changes across the globe, it is argued. 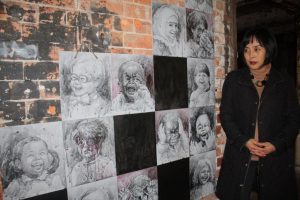 At the Bargehouse, the décor, or rather lack of it in favour of bare brick and concrete, was an appropriate backdrop for the exploration of stark contemporary phenomena. It hosted an outpouring of expressivity, and shrewd dissections of society’s ills and foibles. Many individual styles in installation, painting, video and photography were bound together in the manifestation. The purpose, said the organisers, was that “by recalibrating its exhibition space into a conversational environment, the exhibition aspires to extend beyond the confined, physical gallery into a simulated space to reflect the world around us.” 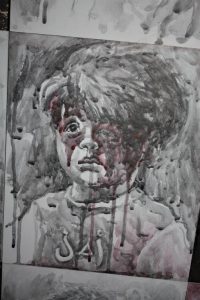 South Korean students – many of whom pay high fees for the privilege of taking courses in the UK – and mature expatriate residents have bestowed their talents on artistic life in many parts of the UK for the past two decades and more.

In 2007, a group of 10 Koreans in London started a group known as 4482 (sasapari), the figures combining the telephone codes of South Korea and the UK to symbolise dialogue, communication and collaboration between those countries. Eleven years later, in its eighth public exhibition, the group has in total given free rein to some 250 Korean artists.

In its statement, 4482 says that the environment “shapes us, impacts us, and changes us. Yet it is often entangled with conflicts and consequences.” This initiative is meant to “provide a platform for artists to create their own Butterfly Effect on the issues of our common environment by presenting their voices through their works. Their voices will be shared and expanded to a network of diverse conversations that invites everyone to participate; subsequently echoing beyond the gallery space to our everyday lives. This open invitation to incur a collaborative Butterfly Effect will bring art and public together.” 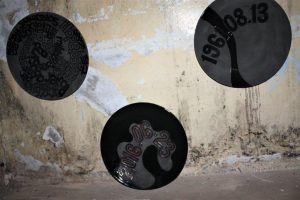 Doing just that, among the installations, one from London’s Sarah E Choi has a simple title, An Olive Tree, but a powerful import. A small olive tree is conspicuous amid symbols of war, cruelty, barbarism and waywardness.

The tree “engages” with, as Sarah says, “moments in life we can never forget. Be it personal or historic, a moment of despair or a moment of heartbreak – innocent people especially children suffer from human greed and abuse of power daily. Whether they’re world affairs or personal pains, the scars will never go away. These long-term sufferings can embitter us, but the hope we have can help us carry on our journey ahead. So, I am planting an olive tree today… a symbol of peace and hope.” 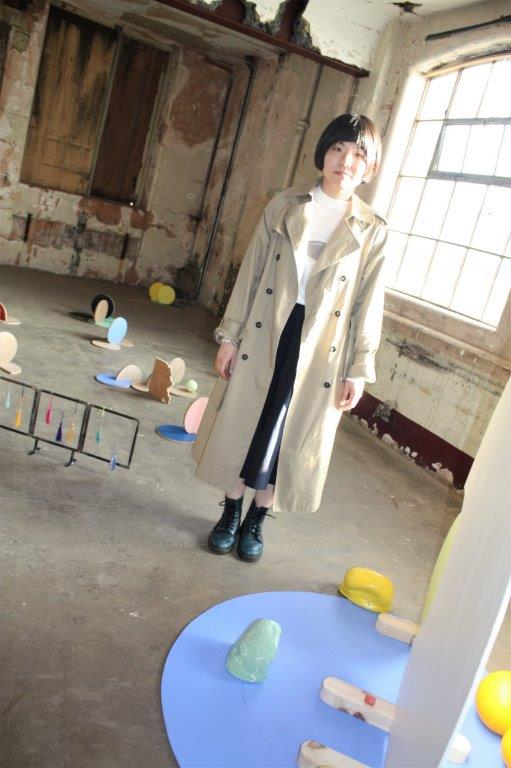 Sarah sets the olive tree upright in a military wooden box (you can buy almost anything on eBay) which once carried bombs for launching on enemies and innocents. The tree is bound with the thread of a hemp cloth – cloth that is commonly used for wrapping corpses. “The olive tree will survive; the bomb box will rot away,” Sarah declares.

Behind the tree is a rank of ceramic plates she refers to as ‘Ten dates’ because they represent incidents or occasions when combat incidents or political events shocked or saddened her, and in some cases caused thousands or millions of civilians to perish. The fateful dates in world history include the Berlin Wall, Tiananmen square massacre and the June 2016 Brexit referendum.

Pitch-black glaze was used to write the dates on the ceramic disks, which were fired at 1,200C. The inscriptions are not particularly visible, “but they never disappear: they are permanent.”

On an adjacent wall, Sarah has 14 portraits, acrylic in a grey wash, and four blank panels. These represent faces of children caught up in violent battle. One of the subjects is the Syrian boy sitting dazed and wounded in an ambulance after an airstrike on Aleppo in August 2016. The blood-soaked face of five-year-old Omran Daqneesh, became a symbol of the unremitting cost of warfare globally. 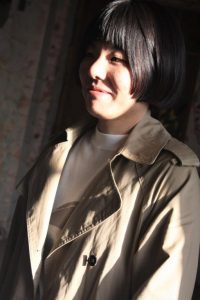 Sarah, who has produced evocative work in many fields of the visual and plastic arts (notably exquisite ceramic sculptures of London and Thames-side scenes) says: “My work as an artist, humanitarian and believer allows me to express hope in despair.”

In the section Material World, seven artists investigate how the senses confront the seemingly insurmountable challenges of modern society. A wall panel introducing the collection of works states: “Our monumental world is one Catch-22, a paradoxical situation of which we want to be in charge but cannot escape from being controlled.”

One of these artists is Aeji Seo, participating in her first London exhibition. She presented an ambitious, mixed media assemblage under the title Unstable Solidarity. Can a unifying core of meaning be discerned in the complexity of shapes and objects she laid out? She explained that the vantage point of a three-dimensional work was important, because for her a painting was inadequate to convey meaning and involve the viewer. “I wanted to invite people more into the space.” 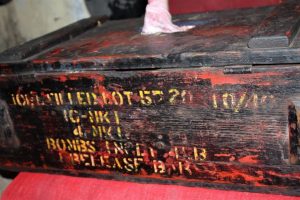 She is on a BA course in painting and printmaking at Glasgow School of Art. In January she participated in the school’s exhibition Body Bank, at the independent venue The Old Hairdressers in the Scottish city.

Sharp derision of big pharma’s influence on healthcare came from Sun Lee, with Way to Get Better, a digital print showing a fractured model of a hand grasping for empty pill foils and packets. She gained her master’s in fine arts at Glasgow School of Art in 2017. 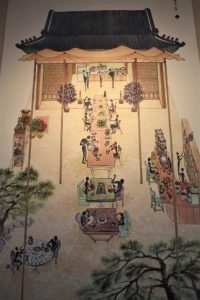 Reflecting traditional craft, Haeree Cho made meticulous use of ink and colours on Korean paper to produce two hangings, 180 cm by 65 cm, with the title Cho-Yul Coffee Banquet. She has indulged in this delicate format previously, and shown work at two previous shows in the 4482 series, in 2011 and 2012. Haeree, who has a PhD in Korean painting from the College of Fine Arts, Seoul National University, had a solo exhibition, Colour Music Score, in 2017 at Ujung Gallery in the South Korean capital. She took her master’s in fine art at Chelsea College of Art and Design in 2010.

Acclamation greeted a performance by the versatile, athletic dancer and choreographer Coco Yeonsoo Do. Her dramatic and compelling act was called In Wonderland and was a play on the cultural differences and confusion of London. 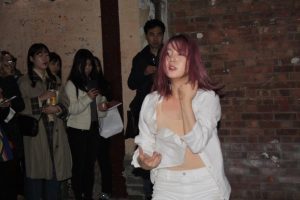 Sponsors of the exhibition were Korean Cultural Centre, Hanmi Gallery of London and Seoul, Asiana Airlines and Gogi Korean Grill. 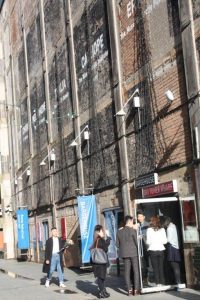 Guests arrive at the Bargehouse.

The path to digital classification.