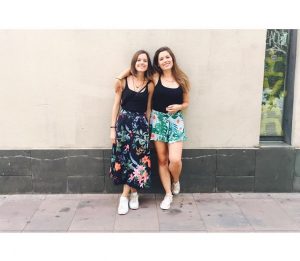 Talented sisters from a musical and creative family in Colombia, Adriana and Silvia Ospina have embarked in parallel on new stages of their careers by establishing themselves in London.

With a voice of expressive beauty, Adriana is a singer excelling in many styles and a writer of alluring ballads who lived for several years in Barcelona before moving to the UK.

Silvia, a freelance visual artist, arrived earlier in what she says is the “amazing, great/tough” capital on the Thames.

Planning to use her UK base as a springboard for reaching out to new audiences, Adriana is investigating a turn to crowdfunding. She has a vast songbook of material from which to choose. Her influences include jazz, pop, soul, Latin American and Brazilian music, which led club-goers in Barcelona and elsewhere to take her to their heart.

She has a portfolio of videos of jazz and blues standards and has been composing for the last two years in Latin and pop styles – a dozen compositions in all that are distinguished by being intelligently emotional. 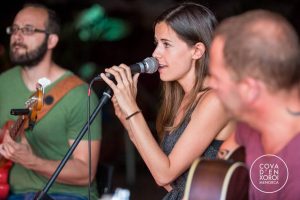 Where does this melodic wealth come from? Adriana says that as a child, “music was always around me and I started singing from a very young age.”

After studying fashion design, she enrolled in L’Aula de Jazz y Musica Moderna in Barcelona in 2009.

This impressive grounding raised the curtain on an active musical career with various projects in the Catalan metropolis in venues such as Marula, Harlem Jazz Club, Sala B, Sala Barts, Robadors 23 and El Siglo.

She was invited to take part in the 46th edition of the Voll-Damm Festival Internacional de Jazz de Barcelona in 2014.

For close to three years, Adriana sang with the Orquesta ilegal de Barcelona (which took the tag ‘illegal’ from its some-time unlicensed street performances) in a weekly programme at the Harlem Jazz Club. The band was invited to be part of the Festival MPB (Musica Popular de Barcelona) in 2013 and 2014 and to perform at the “Jazz and Food” event which opened the 48th edition of the Voll-Damm festival in 2016.

In addition to performing, Adriana has passed on her knowledge and insights by giving private singing and music lessons to students of various ages and levels.

She has collaborated with artists in cities including Barcelona, Bogotá, Bremen and London. 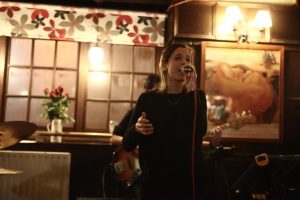 Adriana singing at the Eleanor Arms in London

One of Adriana’s most moving recordings is her haunting composition Décimas. She bases her lyrics on décimas, a form classically of 10 verses, popular in Latin American folkloric tradition. This four-minute track, superbly filmed, was recorded in Barcelona, with her brother Juan Andrés on piano and as arranger.

Silvia has for the past eight years been a freelance graphic designer and visual artist.

She has been working in the textile industry for the most recent five years and has found it a place to merge her design concepts and her artistic background.

Like Adriana, Silvia has been greatly inspired by her artist mother. She started drawing as a young girl – and credits her mother for continuing to give valuable mentoring to this day.

Many of Silvia’s textile designs look to nature – and especially plants in their “wild stage.” In her print designs she says she is “learning from nature.”

She has been producing hand-made exclusive artworks for the womenswear industry and some of her prints have gone into the stores of brands Zara, Mango, Bershka and Zara Home among others. 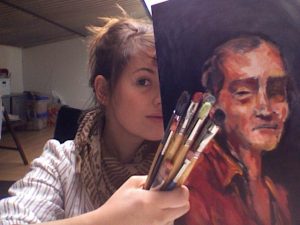 Silvia in her studio.

Aside from the textile industry, Silvia’s deep passion is for painting.

Silvia was artist-in-residence at Roca Umbert Fàbrica de les Arts, a major cultural and arts centre at Granollers, a city north of Barcelona; and took part in exhibitions in Bogotá and Spain.

She is fascinated by contemporary visual art and was enthralled by the exhibition All Too Human: Bacon, Freud and a Century of Painting Life, which is at Tate Britain until August 27, 2018. She was drawn to the expressionist works of such artists as Jenny Saville who shows in bold, unsparing outlines human bodies in their fleshy reality.

Silvia’s admiration for this genre finds a stylistic reflection in many of her figurative portraits which involve “exploring identity.” 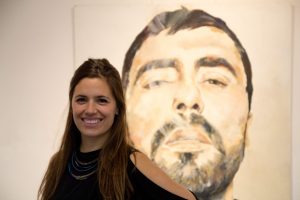 Her versatility extends to painting dramatic abstracts in oil that suggest raging skies and might even be called Turner-esque; and to drawings of household scenes including a series entitled Ephemeral Time.

Their careers to date can be followed at www.adrianaospina.es  and www.silviaospina.net

And there is much more to the family story. Adriana and Silvia are proud of their brothers Juan Andrés Ospina and Nicolás Ospina, who are also musicians and have worked on arrangements, compositions, productions and so on for projects in jazz and Latin American genres. Juan Andrés and Nicolás appear sometimes as a comedy musical duo by the name of Inténtalo Carito and composed an ingenious song Qué difícil es hablar el español (how difficult it is to speak Spanish) which has drawn more than 13m views on their YouTube channel. 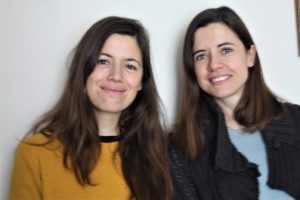 Silvia and Adriana relax on a day off.

This inventive number dwells hilariously on the challenges of embarrassing double meanings of Spanish words as seen from different regions of the Hispanic-speaking world. Their work can be followed at: www.nicolasospina.com and www.jaospina.com

Diving BDI or another “correction”… wonder?