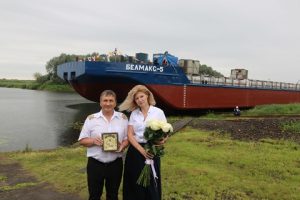 The launching ceremony was attended by representatives of the Customer (STLC), the Navashino district authority, business partners, employees of Okskaya Sudoverf Shipyard and Navashino locals. 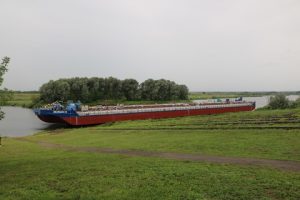 A full view of the he Oil barge “Belmax 5”

The shallow-draft double hull oil barge design was developed by Marine Engineering Bureau. The vessels are intended for transportation of petroleum products, primarily fuel oil, with a flashpoint of 61º C and above and feature improved level of environmental friendliness. The barges will be operated by Belmax Shipping Company on the Belaya, Kama and Volga rivers.

The contract for Project ROB20 oil barges was signed on October 31, 2017. Keel-laying ceremony for the BELMAX class fifth vessel was held on March 26, 2018.

Okskaya Sudoverf JSC is a modern shipbuilding enterprise and a subsidiary of VBTH division of UCL Holding specialising in the construction of oil tankers, medium-tonnage dry bulk carriers of mixed ‘river-sea’ sailing, containerships, special crafts and barges. In 2015, the Company became the second largest shipyard in Russia in terms of total tonnage of completed and delivered newbuildings.