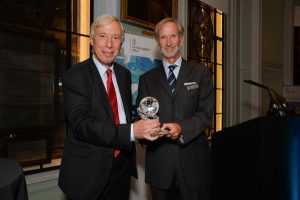 TAUNTON, 11 OCTOBER 2018 – Named in honour of the first Hydrographer of the Navy, the Alexander Dalrymple Award has been presented by the UKHO each year since 2006, in recognition of an individual’s outstanding contribution to hydrography: the science of surveying and charting our oceans. Mr Bryant is the thirteenth recipient of the award (and the third recipient from the UK) nominated for the global impact he has made within the international hydrographic community.

Over his career spanning 45 years, Mr Bryant has coordinated the training of hundreds of students. This has included securing a long-term partnership with the NIPPON Foundation, under which the UKHO has trained 64 international students in marine cartography.

Presenting the award at this year’s World Hydrography Day reception, Rear Admiral Tim Lowe congratulated Mr Bryant on his achievements and his commitment to enhancing the cartographic skills of individuals and nations across the globe. These skills are essential to supporting maritime trade and the safety of ships navigating our oceans.

During his speech at the event, RAdm Tim Lowe also commented on the need to support the use of bathymetry – the study of underwater depths – and wider marine geospatial data in developing sustainable marine economies:

“As experts in seabed bathymetry and marine geospatial data leaders, it is incumbent on us to support the data revolution. Whether that is through providing access to vast stores of information, or by promoting the development of skills and expertise to unlock that information’s potential, we have the opportunity, as never before, to guide our marine economies into the future.”

The Minister of State for Defence, The Rt Hon. the Earl Howe also spoke at the event, addressing the value of this data for sustainability and resilience:

“As climate change puts increasing pressure on resources, a full understanding of the marine environment is directly relevant to the sustainable exploitation of the sea – for example, the analysis of marine resources, from the health of coral reefs to fish stocks and mineral reserves. Seabed mapping is a key enabler of sustainable and resilient seas, oceans and coastal communities – and that is as true of the North Atlantic as it is of the “Blue Economy” of the South-West Pacific.”

This year’s World Hydrography Day reception was held in October to coincide with the International Hydrographic Organization’s annual council meeting, attended by over 30 senior Member State representatives from across the international hydrographic community.