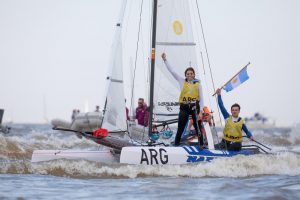 On home waters, and in a variety of conditions, the Argentinians sailed consistently throughout the week and led the fleet for the vast majority of the competition.

Already in first place ahead of the Medal Race, Cittadini and Romairone finished sixth, which was enough to hand them the gold medal with a seven-point advantage.

“It’s really exciting to see all the people on this river, which we’ve been sailing on for a long time, cheering for us – it’s amazing,” said Romairone.

“I’ve learned a lot of things this week, such as how to stay focused all the time and how to manage nerves. I never usually get nervous, but this time I did!”

The Athlete Role Models for Sailing are Argentineans Santiago Lange and Cecilia Carranza Saroli, who won gold in the Nacra 17 fleet at the 2016 Rio Olympic Games.

They have been present at the venue daily, and Romairone believes that gave herself and Cittadini extra inspiration throughout the week.

“They [Santi and Ceci] always give us encouragement and advice – they were a really big help,” she said.

“They are such good sailors, and just to see them in the club and be so close to them was very motivating.”

After going all out for the Youth Olympic Games, Romairone admitted she is unsure of their imminent plans, but expressed an interest in one day moving into the senior Nacra 17 boat.

“Our objective was always the Games. We didn’t project anything further, so at this moment I don’t know,” she added.

“Anything can happen. There are a lot of boats to sail in. It would be amazing [to sail the Nacra 17] – it’s a really cool boat.”