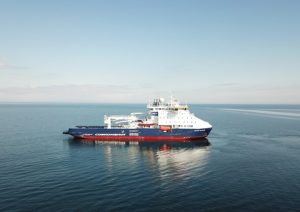 Yevgeny Primakov, an icebreaking standby vessel owned and operated by Sovcomflot, has been awarded the 2019 Support Vessel of the Year by Offshore Support Journal, an international trade publication. The official award ceremony was held in London on 6 February.

On behalf of Sovcomflot, the award was collected by Igor Tonkovidov, Executive Vice President and CTO/COO.

The multifunctional icebreaking vessel Yevgeny Primakov was delivered to Sovcomflot in January 2018. She serves the offshore oil and gas platforms of the Sakhalin-2 project under a long-term agreement between Sovcomflot and Sakhalin Energy.

The vessel is designed to operate in the challenging ice and navigation conditions of the Sea of Okhotsk. She has been assigned an ICE-15 high ice class. Yevgeny Primakov is equipped with two Azipod units with a total capacity of 13 MW, which ensure high levels of maneuverability and allows her to sail independently through ice up to 1.5 m thick, with a snow cover of up to 20 cm. 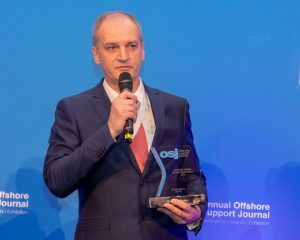 For a year now Yevgeny Primakov has been ensuring the safe operation of Sakhalin-2 offshore platforms, providing year-round standby, search and rescue services. She also performs ice management functions, preventing the formation of hummocks and heavy ice fields around the platforms and escorting other vessels through the ice.

In addition to that, Yevgeny Primakov is equipped to quickly respond to possible emergencies and undertake sub-surface surveys, engineering, and repair works, when needed.

The vessel also has a large passenger capacity: despite her relatively small size, Yevgeny Primakov can provide sleeping accommodation for 70 people (in addition to her crew), and in the event of an emergency she can accommodate up to 150 people.

Yevgeny Primakov flies the Russian flag and has Saint Petersburg as her port of registry. Her all-Russian crew numbers 18.

Sovcomflot (SCF Group) is one of the world’s leading energy shipping companies, specialising in the transportation of crude oil, petroleum products, and liquefied gas, as well as the servicing of offshore oil and gas exploration and production. The company’s fleet includes 145 vessels with a total deadweight of 12.5 million tonnes. 80 vessels have an ice class.

SCF Group operates the world’s largest fleet of icebreaking supply and standby vessels, seven of which service Sakhalin-2. Deploying such vessels on standby duty in the Sea of Okhotsk, on a permanent basis, contributes significantly to improving environmental safety in the Far East Sea Basin.

How technology can help shipping companies avoid accidents at sea