Young International Freight Forwarder of the Year: ‘And the winner is…….’ 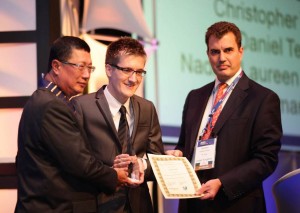 The Award, sponsored by TT Club, the leading provider of international freight transport insurance, has been won this year by Daniel Terbille of South Africa.

22 October, 2012 – Daniel Terbille, one of four regional finalists who presented their papers to the judges at FIATA’s Annual Conference, received his award from TT Club’s EMEA Regional Director, Andrew Kemp. “It was a difficult decision to pick an overall winner” said Kemp “however Daniel prevailed and deservedly takes this year’s award”.

The award is presented in recognition of forwarding excellence and was established by FIATA with the support of TT Club to encourage the development of quality training in the industry and to reward young talent with additional valuable training opportunities. The TT Club has been a sponsor of the award since its inception and is firmly committed to the importance of individual training and development within the global freight forwarding community.

The Award Steering Committee strives to make the challenge appealing to a greater number of candidates and allow them to call on their day-to-day experiences when working for a range of organisations, whether it’s a small customs agent or a multi-national operator.

This year’s candidates were set the task of examining the multimodal movement of a key import or export relevant to their country of operation.  Extra marks were awarded based on the complexity of the cargo matter, mode of transport, routing, regulatory issues faced, plus any cross-border issues such as customs regulations and/or bonds involved.

In addition to Daniel, who represents FIATA’s Africa and Middle East region, the other finalists were: Salman Ali (Canada) representing the Americas, Chris Yabsley (Australia) from the Asia Pacific region, and Nadine Baumgarten (Germany) representing Europe, .

Speaking at the award ceremony, TT Club’s Andrew Kemp, said, “We are proud to have been able to continue our sponsorship of this prestigious award, now in its fourteenth year. This year’s awards proved to be the most successful so far in terms of attracting candidates from across the globe. The calibre of the dissertations and presentations were of the usual exceptional standard and it was clear that a lot of research, planning and hard work had gone into their preparation.”

I like your blog and most important the topic is very informatics latest entry in The TT Club is the international transport and logistics industry’s leading provider of insurance and related risk management services and congress for your award . Here i got the very useful info.