Called to the BAR… 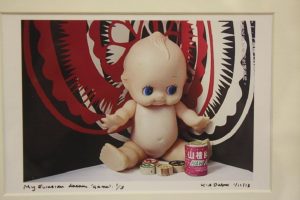 Called to the BAR: Brent Artists Resource mixes its media at its Contemporary Art Fair,  By James Brewer

Enthusiastic members of a thriving contemporary arts organisation serving west and northwest London, are successfully reaching out to all corners of the capital.

Established and emerging artists have a total of 100 works at the Brent Artists Resource (BAR) contemporary art fair, which runs until January 18 2014. They have turned to almost every medium in the book – acrylic, oils, linocut, etching, photography, pastel and even black clay.

Based just down the road from Willesden Green tube station, BAR is a magnet for creative people from the immediate area, but attracts people of calibre who exhibit in showplace galleries in London and internationally.

Among these is Kathleen Dutton who draws inspiration from her travels over the years, to the Far East, Central America and just recently to New Zealand. 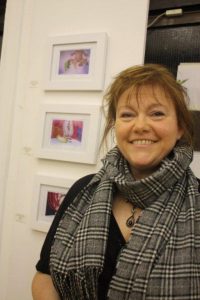 Kathy took to the Brent event three of her intriguing cameos from her Microtopia (“visions in miniature”) series. These are based on photographs of tiny mementoes she collected while living and working in Asia. They include plastic dolls with unlikely pink flesh from shops in Hong Kong, and green and brown dolls from Japan. She uses them to illustrate “a place of the imagination between East and West, ”

“I strive to create a feeling of timeless simplicity and space, ” she says, “the figurative distilled to its simplest form.” The results seem symbolic of Asia’s economic and 21st century renewed creative, if on occasion formulaic, rise.

“In the early part of my career as a graphic designer, the art of developing symbols and logos developed my ability to condense a number of ideas into a simple visual language, ” she has written.

Kathy says that her life “is on the bridge between Chinese culture and European culture. I love both and feel at home in either world, mostly, although I can easily feel like an outsider too, but that is OK because I like looking in from the outside.”

She has been inspired by Zen and Taoism, and Chinese art and calligraphy, and her work “explores inner landscapes.” Her time with the Conran Design Group in Hong Kong, where she spent 11 years, immersed her in cross-cultural communication with clients in Malaysia, Singapore, Taiwan, China and Japan.

Kathy has a separate exhibition on the Microtopia theme at Kingsgate Workshops Gallery,  110-116, Kingsgate Road, Kilburn London NW6,  until December 14 2013.

She is a featured artist at Skylark, two artist-run galleries on the South Bank of the Thames at Gabriel’s Wharf and OXO Tower Wharf. For International Women’s Day 2013, she was involved in a project there with her printmaker sister Jennifer; while in the summer, she created a body of work for the Chelsea Fringe, using floral themes and paintings based on what she calls My Eurasian Dream Garden. “This series of paintings focuses on the inner landscapes of what I call ‘the light garden’, a place of my imagination.” 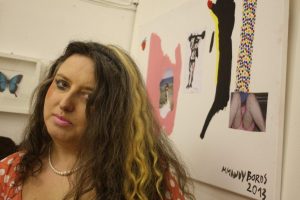 Some of the artists in the BAR exhibition stayed closer to home in their depictions: Peter Murry with Dollis Hill Dreamtime, Ruth Kitching with Parliament Hill at Dawn and Parliament Hill at Dusk. Joel Whybrow had a more geographically distant theme, with the medium for his Hallowe’en in Nebraska being… an Etch-a-Sketch.

Marta Boros contributed an arresting collage entitled Afrodyta-Afrodyta, which managed to embrace sexual drama, an innocent photo of Marta on the Baltic shore of her native Poland, and a strawberry , as in “strawberry fields forever.”

BAR will in 2014 celebrate 30 years of supporting all areas of the visual and performing arts. It recently moved into two units at Queens Parade, Willesden Lane, which it says enables it to provide new opportunities for members and the community at large. Artist collaborations, pop-up galleries, education workshops, live events and artist-in-residence programmes are lined up, including a new venture, BAR Lab giving low-cost and free workshops and lectures. 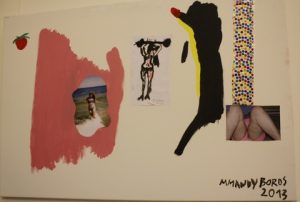 Representatives of Willesden Green Writers’ Group, which shares the Queens Parade premises as a meeting place, were at the art fair to promote their January 16 venue launch meeting and writers’ reception. The free event will celebrate the new home and begin with short readings from members of the group. The succeeding meeting will be on January 23, after which the schedule will revert to the first and third Thursday of the month from 7.30 – 9.30pm. Willesden Green Writers Group was established in 1994 and has won the Arts Council-administered Raymond Williams Community Publishing Award for the anthology The Monkey’s Typewriter.

Outteridge and Jensen come back flying