Thousands of lives will be lost in the Med unless EU… 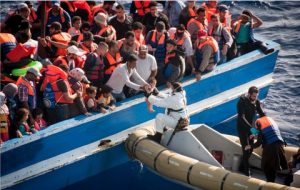 THOUSANDS OF LIVES WILL BE LOST IN THE MEDITERRANEAN UNLESS EU GOVERNMENTS TAKE URGENT ACTION,  SAY SHIPOWNER GROUPS AND SEAFARER UNIONS

European and global operators of merchant ships have joined forces with seafarers’ unions to urge EU Member States to take immediate collective action to address the growing humanitarian crisis in the Mediterranean Sea.

Since 2014, thousands of people have been attempting the dangerous sea crossing to Europe, from Africa and the Middle East, in overcrowded boats not fit for purpose, with over 3, 500 people having already lost their lives.  Many are at the mercy of people smugglers. 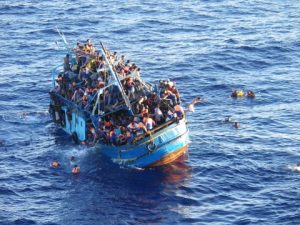 In a joint letter to leaders of all 28 EU Members States, the European Community Shipowners’ Associations (ECSA), the European Transport Workers’ Federation (ETF), the International Chamber of Shipping (ICS) and the International Transport Workers’ Federation (ITF) have warned that the crisis is spiralling out of control.  They warn there is a serious risk of further catastrophic loss of life unless EU Member States respond with greater urgency.

The shipowner groups and unions are calling on all EU Member States to give immediate priority to increasing resources for Search and Rescue operations in the Mediterranean, in view of the very large number of potentially dangerous rescues now being conducted by merchant ships, a situation they believe is becoming untenable.

Merchant ships rescued around 40, 000 people last year and this number is predicted to increase dramatically.  The shipping industry fully accepts its legal responsibility to rescue anyone in distress at sea, but argues it is unacceptable that the international community is increasingly relying on merchant ships and their crews to undertake more and more large-scale rescues.  Single ships have had to rescue as many as 500 people at a time, creating serious risks to the health and welfare of seafarers who should not be expected to deal which such situations. 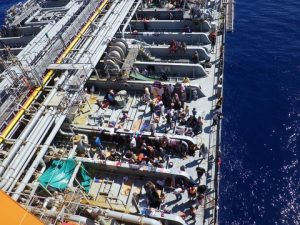 The navies and coastguards of those EU Member States on the front line in the Mediterranean have made impressive efforts to respond.  But as the situation gets worse the shipping industry believes there must be a commensurate increase in State funded resources for Search and Rescue operations to address this major humanitarian crisis.  In practice this means that all EU Member States need to share the financial burden in order to help prevent thousands more deaths.

However, the shipping industry also suggests that the EU and the international community need to provide refugees and migrants with alternative means of finding safety, without risking their lives by crossing the Mediterranean in unseaworthy boats.

The shipping industry says that the development of solutions to this crisis must be treated as an absolute priority as ‘it is literally a matter of life and death’.  The shipowners’ representatives and unions are therefore requesting that this issue should be added, as a matter of real urgency, to the agenda of the European Council and relevant meetings of EU Ministers.

The letter sent to EU Governments, which is also supported by other global shipping organisations, is attached at the end of this news story.

This joint call for action is being followed-up with EU governments at national level by Europe’s national shipowners’ associations and seafarers’ unions.

A video showing the large-scale rescue in the Mediterranean of over 500 people by the CS Caprice can be found here http://bit.ly/1C6tdbM

In addition to the national shipowners’ associations and seafarers’ unions that are members of ECSA, ETF, ICS and ITF, the shipping industry letter to EU Member States is also supported by the following global shipping organisations: BIMCO, Intercargo, Interferry, InterManager, Intertanko and the World Shipping Council.